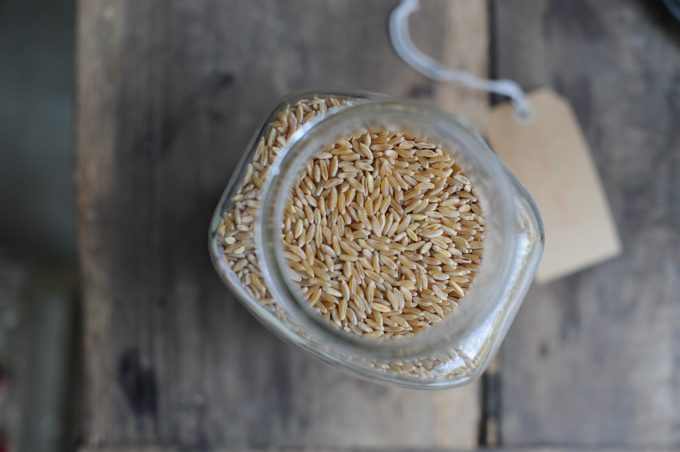 Sourdough & Khorasan .. a gorgeous combination .. they just work together beautifully enhancing the best of each other both flavour-wise and nutritionally. It doesn’t just taste great, the sourdough process itself is suggested to enhance specific bioactive compounds including both dietary fibre or phenolic compounds. The long slow fermentation with LAB means that the bread increases the already naturally high levels of antioxidants found in Khorasan wheat. As the lactic acid bacteria produce both lactic and acetic, the acidification facilitates the release of more free polyphenols and free flavonoids (antioxidants) which are associated with a wide range of heath benefits. Antioxidants reduce oxidative stress, and they slow down tissue and organ damage and effectively slow down the ageing process. Which is fantastic for our health, and repairing damaged molecules.

Khorasan (Trictum turgidum) is another of the most ancient varieties of wheat and though it is relatively uncommon it has begun to gain ground recently because of positive attention in the health food industry.  Like spelt, it originated in Mesopotamia, in the region that is now covered by areas of Iraq, Turkmenistan and Afghanistan, and is sometimes referred to as ‘Wheat of the Pharaohs’.  This area is also known as the Fertile Crescent and it is believed to be the birthplace of agriculture.  Khorasan wheat was never produced on a commercial scale, rather it was grown by smallholders, until 1949 when US airman Earl Dedman bought a few grains in Egypt and sent them to his father, a farmer in Montana.  The “story,” was that the grains had been found in an ancient tomb, and so the grain became known as ‘King Tut’s Wheat’. The Dedmans grew the crop for a short time but it then fell from favour, before being revived by Bob Quinn, who has grown since 1977.  In 1990, Quinn trademarked Kamut, the name for the species of Khorasan which he had cultivated.  The trademark guarantees certain qualities for the grain, including that it must be grown organically and must not have been subject to any breeding or genetic manipulation.

Khorasan is a tetraploid species of wheat (whereas common bread wheat is hexaploid), with similar biological properties to durum wheat.  It has a very high tolerance to drought and, like other ancient wheat varieties, so it is less vulnerable to environmental stresses than modern wheat.  Too much rain, though can cause fungi and disease so, unsurprisingly, it doesn’t grow well in the UK!  Kamut is only grown in Montana and the nearby Canadian provinces of Alberta and Saskatchewan. The crop itself grows strikingly tall, golden ears with distinctive long, black, whiskery awns. The grains are double the size of most wheat, giving Khorasan a high thousand-kernel weight.  They are also characteristically hump-shaped and so nicknamed ‘Camel’s Tooth’.  The seeds are fragile and brittle, cracking easily, so harvesting must be done gently and the grains carefully treated post-harvest.

You can buy whole Kamut grains, which are a distinctive amber colour with a slightly glassy appearance, or you can find it in a cracked form like bulgur wheat.  The grains are also milled to produce a wonderful, creamy yellow flour, with high levels of selenium and polyphenols. 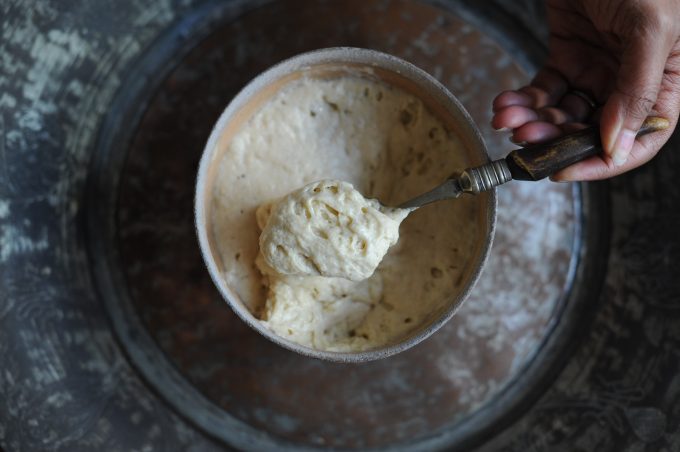 The long slow fermentation with LAB means that the bread increases the already naturally high levels of antioxidants found in Khorasan wheat.

It is so distinctive in its flavour, colour and texture and the dough when correctly hydrated, has a velvety feel and a luxurious, buttery-rich, nutty flavour.  On top of its enchanting taste, Kamut also has a number of reputed health benefits, being higher in protein, amino acids, vitamins and minerals than modern-day wheat. The consumption of kamut has been shown in some studies to reduce the risk factors associated with cardiovascular disease including lowering low-density lipoproteins and regulating blood glucose levels. Several studies have highlighted the anti-inflammatory properties of kamut grains owing to its higher polyphenol content compared to its modern counterparts such as durum. Kamut in comparison to durum has also shown to positively influence the gut microbiome mainly characterised by an increase in the diversity of health-promoting bacterial species that are important to support overall health and wellbeing.

Dough made with Kamut feels velvety and yields lusciously in your hands.  It makes great flatbread, as it has a course granular endosperm.  I recommend using Khorasan as part of a blend if you want to get a country-style loaf, generally, about 30% can be used to make a marked difference in flavour and texture, without losing volume.  It is worth noting that Khorasan has a high water capacity and is very absorbent, so if you are using it in a recipe in place of wheat flour, you may need to add more liquid to keep it supple and to bring out its moist butteriness, so adjust your water accordingly. Alternatively, it makes exceedingly good flatbreads.

Attend one of our workshops and be part of our team