Over forty years ago, a little girl fell head over heels in love with the bread she was served in the local village restaurant in the Dordogne. This simple passion led her to train as a baker, but when she stopped being able to eat industrial bread, she embarked on a lifetime of research to discover why she could digest sourdough. This has has grown into The Sourdough School as we know it today; leading the way in the application of the most up to date research, to make bread that nourishes.

Vanessa can normally found with her hands in the dough or with her head in a study and is writing book number 6 at the moment as well as researching the effects of fermentation, the gut microbiome and mood as part of her work towards her Doctorate on nutrition and digestibility of bread. Vanessa is a specialist sourdough baker and runs The Sourdough School. She is an award-winning author & regular contributor to BBC Radio 4 Food Programme.

Vanessa is known for her deeply passionate belief and understanding about the synergy between the fermentation of flour to make bread and gut microbial health. She believes that we need to re examine the way we bake  bread, and mill flour, and has a core 7 principles of baking to nourish that runs throughout her approach.

You will most often find her baking bread, or studying whilst the dough is proving. Vanessa’s commitment to her specialist subject sourdough and baking with wild yeast is absolute. It has been core to her work and life for over 30 years and her love of sourdough is, as ever, unwavering ..

…. When Vanessa was nine, her parents bought a house in rural south-west France. Vanessa’s Italian mother loved good food and was a senior chef at Keele University and both her English grandmother and Italian great-grandmother were bakers, and the house was just 60 yards away from the thriving rural French village bakery. The bakery supplied all the bread for miles around and was right the heart of the community. She was just nine years old and she fell in love with everything French – the wine, the cheese, the fresh fruit and vegetables, the farmers, and the local markets, but most of all she fell in love with the bread,

The instant that she walked into this bakery she knew this was something special. She didn’t even know the word for bread in French, but she fell instantly in love .. “ I made a connection that will last as long as I breathe.”

She bought bread every day and learned a new word each time until she had enough words to ask, age eleven if she might stay and watch. Every morning at 3 am she would creep down 2 flights of ancient wooden stairs, climb out of the window, grazing her knees and run down the alleyway in the pitch black to the bakery. She’s run as fast as her legs could because it was only the light of the moon that lit the way, but her love of the bakery was stronger than her fear of the dark. As she pitched running into the square the bakery oven was lit. The air was cool and filled with the smell of oak burning, and she never slowed down until she was right inside the bakery. The bell on the door would ring furiously as she knew once she was inside the warm brightly lit bakery she was safe.

As the years rolled on nothing changed. Every holiday, every chance she’d work on the bakery. Sweeping the floors, serving the customers, cleaning and helping to make the bread and she spent every spare moment of her childhood school holidays over Easter, Summer and half terms working in the village bakery. It was in this rural community that she really connected to farmers and the land, and the relationship between food and family and community that was right at the heart of French living. Aged 18, she qualified as a baker and a chef in the UK, but there were no ‘real’ bakeries. 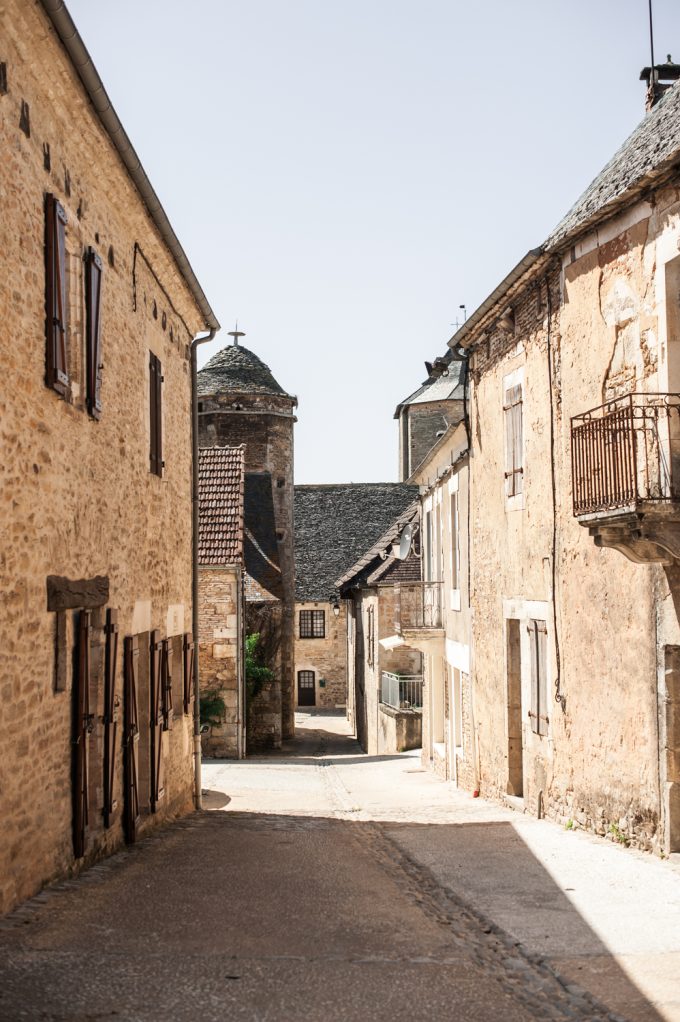 Every morning at 3 am she would creep down 2 flights of ancient wooden stairs, climb out of the window, grazing her knees and run down the alleyway in the pitch black to the bakery.

In 1992 returning to France, she worked in a restaurant in Paris for a summer and then as an apprentice baker in the Dordogne. Returning to the UK, Vanessa worked as a baker and chef in a hotel in Leicester whilst at university and completed a degree in Psychology of Human Communication. It was whilst finishing her degree in 1995 that she became poorly, and was given a strong dose of antibiotics called Metronidazole. It was one of a long list of antibiotics that destroyed her gut microbiome and to her utter dismay, she stopped being able to tolerate wheat. It made her ill and she had no option other than to stop being a baker, and so she gave up the thing she loved most.

She gave up the thing she loved most.

For over 4 years she avoided all wheat until she returned to the bakery and was given a warm bread by her friend. Unable to resist Vanessa ate the bread and discovered at that moment that she could digest sourdough without issues.  When she returned home she ate ordinary commercial bread and was poorly again. This was a pivotal moment and she set out to try and understand why. The doctors she spoke to didn’t have answers; neither did the nutritionists or bakers. She was told she had a leaky gut and so this set a new path – to understand the role of fermentation and how the long slow fermentation eased the digestion of bread.

Teaching The Doctors about Nutrition & Digestibility of Bread.

Over twenty years on and Vanessa is internationally renowned for her passion and unique understanding of long slow fermentation. In many ways, she came full circle as she taught the nutrition and digestibility of bread course to doctors and health care practitioners –  accredited by the Royal College of General Practitioners.

In 2009 she wrote her first book Prepped, her next book Food for Thought won the world book awards for the most ethical and sustainable book and her 3rd book The Sourdough School is a best seller and right on the subject – how to make nutritious and delicious sourdough.  It was hailed as “the most important book of the year,” in 2019 by Waitrose Magazine.

Her 4th book is to be published ion September 2020.

Food for Thought, was also The Telegraph Book of the month and is published by Kyle Cathie

The missing piece of the puzzle

In 2016 as part of researching into the microbes in her sourdough starter, she discovered through tests by Tim Spector that she discovered that she had an extremely low microbial diversity. Overall the results showed a microbiome which was despite eating an incredibly rich diverse fibre-rich diet was disturbingly unhealthy, with less then 1% diversity, Vanessa’s gut microbial diversity was comparable, if not worse than those the of autistic children that had been measured.  She was left with 69% Bacteroidetes and 29 (% Firmicutes – these two microbes are directly involved with obesity

Vanessa in the School as Tim Spector calls in Live from the USA to discuss the latest finding on the Gut Microbiome.

MEDICAL RECORDS
Getting hold of her medical records, she asked Dr Alison Coleville to list the antibiotics she had taken in her lifetime. As she read the results she burst into tears. Over her lifetime she had had been prescribed a total of 57 Antibiotics, her first being administered when she was just 6 months old.

The timeline of Vanessa’s reaction to wheat tied in exactly with a strong dose of Metronidazole. This pot of tablets changed everything. Studies have now shown that antibiotic-induced dysbioses are also likely to influence numerous immune and metabolic outcomes through routes that affect the intestinal milieu’s overall inflammatory tone. In this regard, microbiota alterations can result in a decrease of IgA, a non-inflammatory immunoglobulin involved in pathogen and allergen exclusion (Rautava et al., 2004; Penders et al., 2007a; Cerutti and Rescigno, 2008). In addition, metronidazole has been shown to cause a decrease in the expression of Muc2, the major component of the mucin layer (Wlodarska et al., 2011); thinning of this layer would result in a more direct contact between gut microbiota and epithelium, with likely increases in innate immune stimulation and inflammation .. and in Vanessa’s case it was likely to the cause of her reaction to wheat and many other foods that were to follow.

To make matters worse a nutritional therapist put her on a restriction diet to try and identify the offending foods.  We now know that diversity of food is the key to nurturing microbes but for over a year, Vanessa was restricted to just and a handful of ingredients, which contribute to the extinction of her microbes.  The restriction continued for almost 5 years with multiple food allergies and intolerances.

As Vanessa realised that fermenting flour and water transformed it into bread that was not just delicious but digestible is sealed a path that found her on a mission to understanding how and why sourdough is easily tolerated by people with digestive issues and why is it so important to eat bread that is nutritious.

“Feeling poorly changes everything. It changes the way you feel. I realised that when I ate long slow fermented bread created from the flour blends that I mill, along with other fermented wholefoods I felt better. Not just physically but mentally. As I began to teach, it became obvious that the kind of bread people eat every day was integral to health and my focus stopped being about me. I do not think you can underestimate the importance of the way we approach bread, and the impact on health, given that wheat makes up between 20-30%, (depending on socio-economics) of calories consumed by humans.  My lifes work is about understanding and sharing knowledge of how to make bread that nourishes. It has meant redefining our approach to flour and combining this with fermentation. Fermentation alone is not enough to change the paradigm of bread.  It is a combination of the way we grow our grain, the diversity of the ingredients we use to mill ouor flour, the way we ferment our bread and the way we eat our bread that supports our health and our immune system. At the heart of my research is the belief that that the transformation of flour and water into food that nourishes us impacts both our gut microbiome and our mental health.”

To find out more about the workshops Vanessa teaches click here