I was asked not long ago why I used organic flour to make sourdough. One of the key reasons I that I am committed to using organic flour in sourdough is because the long term implications of ingesting Glysophate in our bread are not yet understood, but I am willing to bet that you would be shocked that Glysophate is sprayed on over two thirds of UK wheat as a pre-harvest weedkillers and used to kill the crop essentially to ripen it faster. The residue is in the grain we mill into flour and it is in our bread. 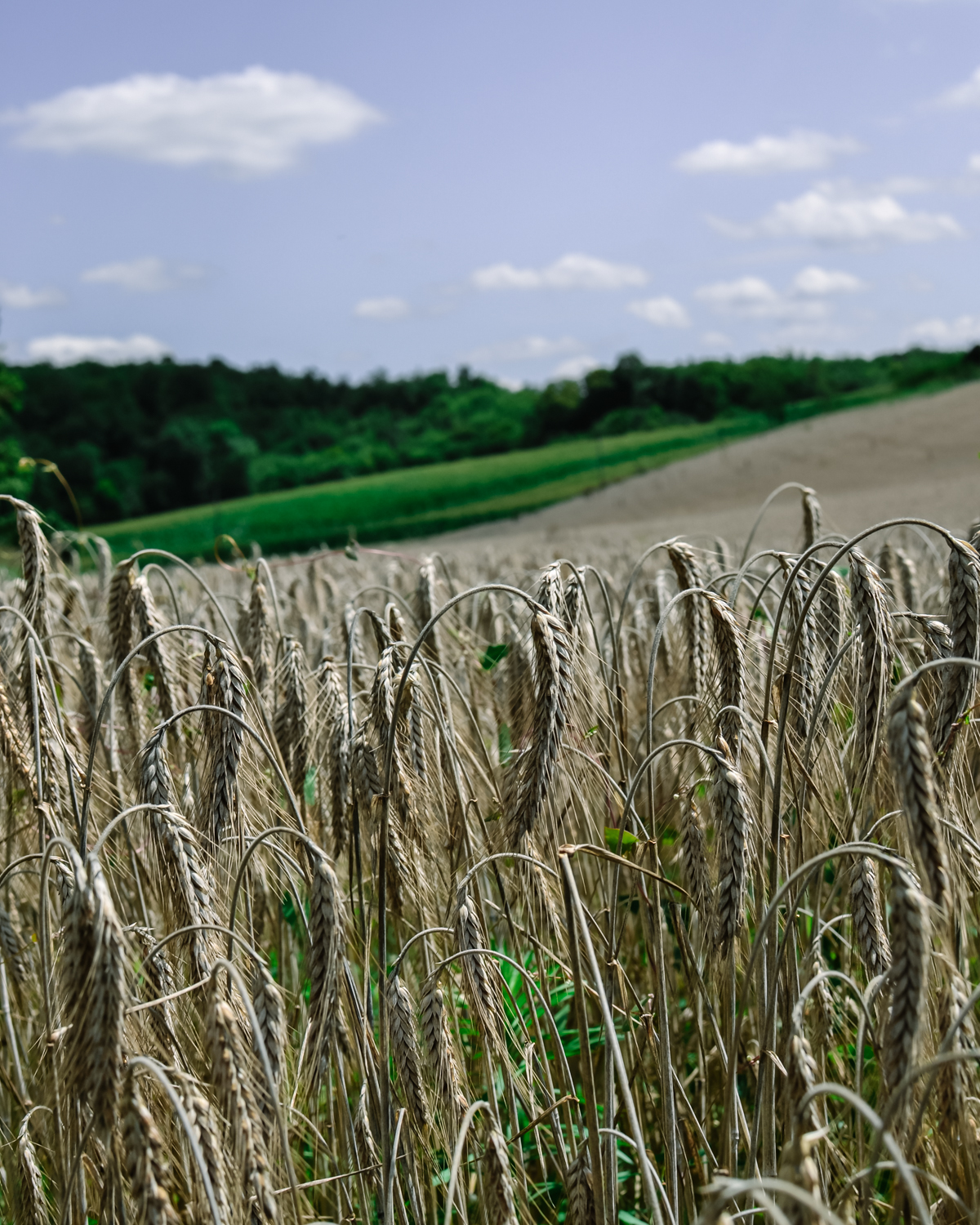 So What is Glysophate ?

Glyphosate is a broad spectrum herbicide used extensively in farming, but you might recognise it as the weed management of public spaces such as parks and other urban areas to kill weed. It is available for use to the domestic market. Monsanto brought it to market in the 1970s under the trade name Roundup. In 2000 Monsanto’s last commercially relevant United States patent expired therefore it is now available from many different companies at a variety of strength, formulations and under many different brand names.

How does it work? Glyphosate kills weeds by blocking the enzyme pathway enolpyruvylshikimate-3-phosphate synthase (EPSPS). The EPSPS enzyme comes at the start of the shikimic acid pathway that converts simple carbohydrate precursors derived from glycolysis and the pentose phosphate pathway to aromatic amino acids and many other important plant metabolites. Monsanto states that glyphosate has a history of 40 years of safe use, that it is not toxic to mammals and decomposes fast in soil. Farmers I have spoken to argue that glyphosate is an essential tool for weed management, and is better for the environment than other management practices such as tillage to control weeds.

Why is this of concern?

In 2013, Friends of the Earth Europe commissioned an independent laboratory in Germany to test urine samples from people in 18 European countries for glyphosate. The results showed traces of glyphosate in an average of 44% of samples. However this study showed that in the UK 70% of people had traces of this weedkiller in their urine.

What’s more Dr Robin Mesnage of the Department of Medical and Molecular Genetics at Kings College in London recently published a paper showing that the Roundup formulation is 1,000 times more toxic than glyphosate alone. He said, “Glyphosate is everywhere throughout our food chain – in our food and water. The lack of data on toxicity of glyphosate is not proof of safety and these herbicides cannot be considered safe without proper testing. We know Roundup, the commercial name of glyphosate-based herbicides, contains many other chemicals, which when mixed together are 1,000 times more toxic than glyphosate on its own.”

The alarming statistics: World wide usage of glyphosate use has increased more than 20-fold since 1990, according to the Center for Biological Diversity (CBD). The conservation advocacy group says this upsurge is largely due to the widespread adoption of genetically engineered “herbicide tolerant” crops, particularly corn and soy, which can withstand an otherwise fatal dose of glyphosate. In 2013, nearly a third of UK cereals, wheat and barley, were sprayed with glyphosate – a total of just over one million hectares.

So what is being done? Well not much by the government as far as I can work out. The Soil Association however, is calling for a UK ban on the use of glyphosate sprayed on UK wheat as a pre-harvest weedkiller and its use to kill the crop to ripen it faster. New figures analysed by the Soil Association from government data were released at a scientific briefing in London on 15 July 2015. This revealed that glyphosate use in UK farming has increased by a massive 400% in the last 20 years and it’s one of the three pesticides regularly found in routine testing of British bread – appearing in up to 30% of samples tested by the Defra committee on Pesticide Residues in Food (PRiF). The levels of glyphosate found in bread are well below the Maximum Residue Level (MRL) set by the EU.

An update from the National Food Strategy document – 2022 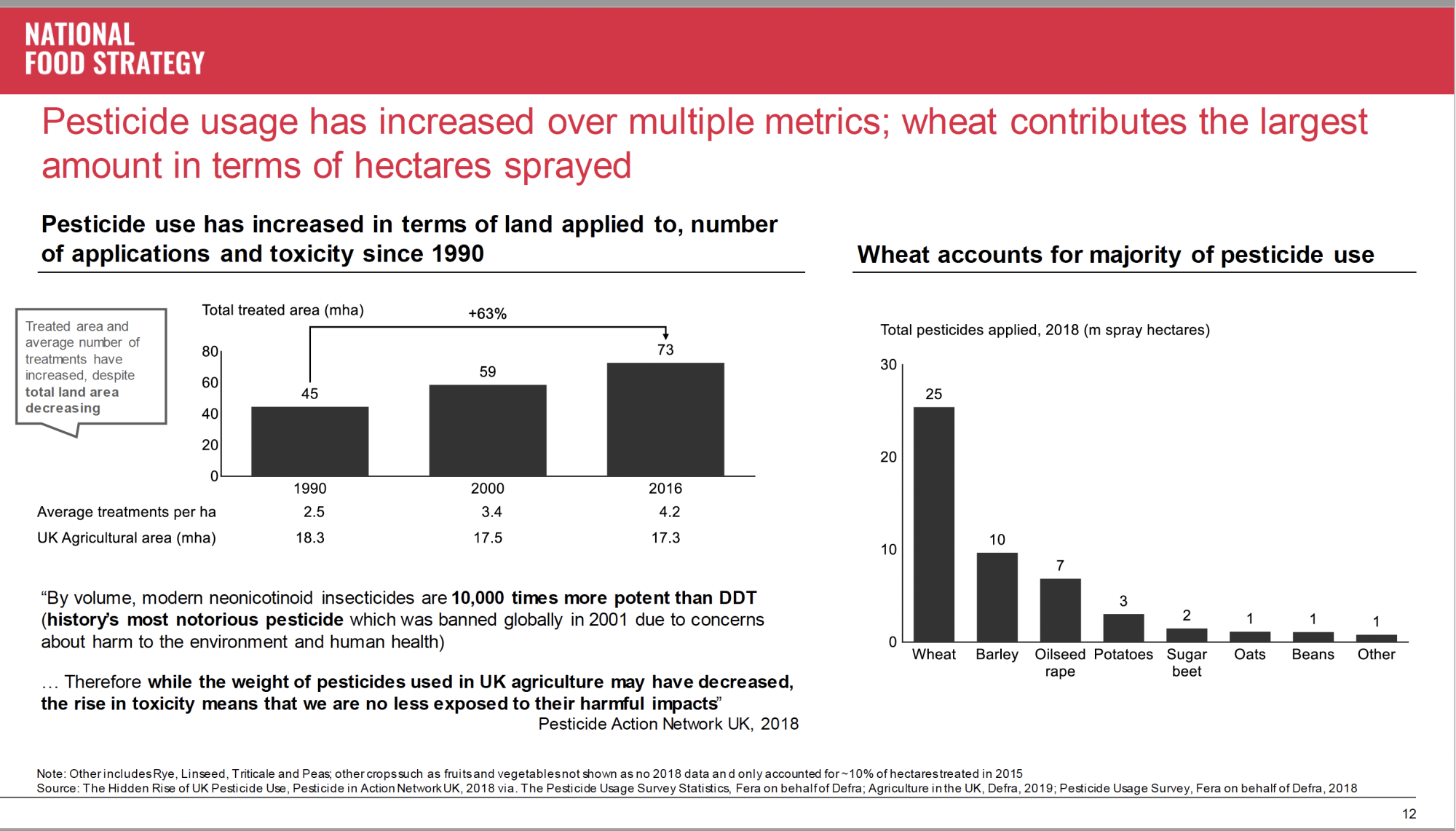 This is the current situation. It is dire.

A ban cannot come soon enough for me because the truth is that no one can say with certainty if glyphosate or any pesticide is safe as long-term human feeding trials have simply not been done. The evidence has been drawn mainly from studies of agricultural exposures. Other evidence, including from animal studies, led the World Health Organisation’s International Agency for Research on Cancer (IARC) to its “probably carcinogenic” classification in March 2015. Prof Christopher Portier, one of the co-authors of the recent report by the World Health Organisation’s International Agency for Research on Cancer (IARC), which determined that glyphosate is a probable carcinogen, said at the launch of the report, “Glyphosate is definitely genotoxic. There is no doubt in my mind.” Glyphosate has been linked to tumours in mice and rats – and there is also what the IARC classifies as “mechanistic evidence”, such as DNA damage to human cells from exposure to glyphosate. Research indicates that chronic, low-dose exposure to glyphosate can cause liver and kidney damage, and studies have pointed to glyphosate as a leading cause of the decline in monarch butterflies. 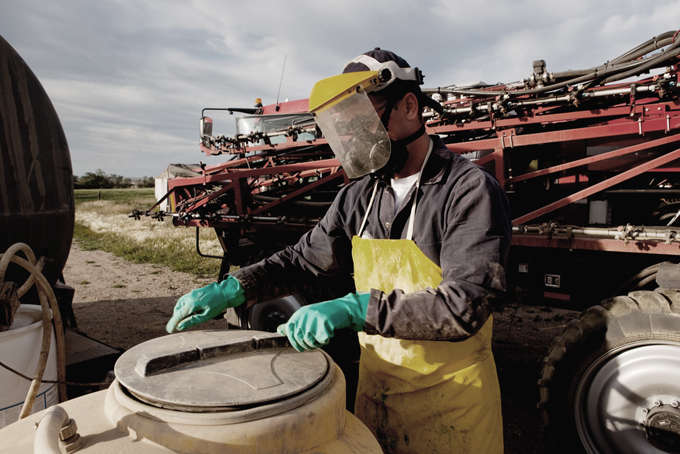 “If glyphosate ends up in bread it’s impossible for people to avoid it.”

Back to the subject of bread, the late Peter Melchett, the Soil Association Policy Director, said; “If glyphosate ends up in bread it’s impossible for people to avoid it, unless they are eating organic. On the other hand, farmers could easily choose not to use glyphosate as a spray on wheat crops – just before they are harvested. This is why the Soil Association is calling for the immediate ending of the use of glyphosate sprays on wheat destined for use in bread.”

Many other countries have already responded to the IARC findings including retailers in Switzerland and Germany who have removed glyphosate products from their shelves; France committed to stop selling it to consumers via self-service by 2018. German states are calling for an EU wide ban. The Danish Working Environment Authority declared glyphosate a carcinogen. El Salvador and Sri Lanka have banned it (due not to the IARC report but other studies linking it with kidney disease). The Colombia government has banned aerial spraying of the herbicide on coca crops. The Environmental Protection Agency of California (Cal/EPA) became the first US state to label glyphosate—the toxic active ingredient in Monsanto’s Roundup herbicide—as known to cause cancer..”

So what can you do?

Five things you can do straight off.