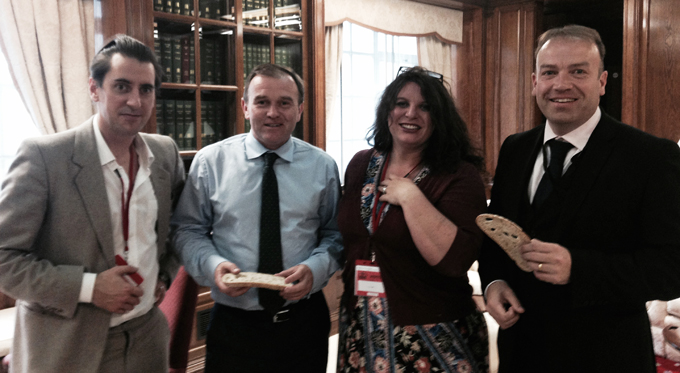 Not all sourdough as equal. I’m often asked about why some people can digest some sourdough and not others.  The shocking truth is that there is fake sourdough on sale all over the UK.

Sourdough is coming to the forefront of bread production. It is the buzz word in the bread industry right now as sales of mass-produced bread have been falling for several years.  There is a huge interest in developing sourdough as most manufactures realise that to go forward they need to look back. There is a very real situation as the use of sourdough, the name and the benefits of long slow fermented bread been hijacked by the corporates. There are several large corporates who are producing mixes that allow mass production of fake loaves, and numbers are ever-increasing.

Last year I was handed a packet of instant sourdough flavour from one of the Directors of the largest yeast manufactures. Just add this to your normal dough and hey presto – instant sourdough. I was horrified. He, on the other hand, seemed amused by my convictions that sourdough should be made traditionally.  My convictions that sourdough should be made using just flour, water, salt and a live starter and not mass manufactured with additives is right at the foundation of what I believe in. My fear is that one day artisan bakers won’t be selling sourdough, that additive-laden, biologically inactive sourdough will become the norm   … and bakers will have to justify their product and sell ” real sourdough.”

Producing an acidified fake flavoured loaf is an insult to real sourdough and to artisan bakers. I really felt that sourdough needed protecting – now.

I complained to the food standards agency. They replied that they could not help as there is no legal definition of Sourdough so in January last year I approached my MP Chris Heaton Harris .

I explained that the lack of a designation means that large corporates are able to manufacture and sell fake loaves with total impunity. The mass manufacturers even use terms that steal the efforts of real artisan bakers. I explained that real bread bakers are not able to compete on a level playing field and that consumers are being sold sourdough that does not have any of the unique properties of true sourdough bread.  Two of which as the improved digestibility and the manageability of blood sugar levels. I backed up these facts with studies.  Chris  Heaton Harris was brilliant and then asked in the early summer if I could meet with several MP’s in Parliament. I asked the #realbread campaign to come to this meeting and we made a solid case that my MP took to DEFRA.

In October last year I travelled back to London again, but this time to DEFRA and I met with my MP Chris Heaton Harris, Ben from Sustain, and George Eustace the Minister of State at the Department for Environment, Food and Rural Affairs (DEFRA) and with the civil servants in charge of bread legislation.  It became clear as we talked that this was not just about integrity and health, but in real terms, the number of jobs that would be created for artisan bakers would be significant; if only they were to be able to compete on a level playing field.

We successfully managed to get the points across and George he agreed to look further in to this and consider a designation for Sourdough. I’m delighted to say that we are meeting with DEFRA  this month to discuss more specifics later this month.

It is not an easy task to produce a definition of sourdough that protects the consumer and the artisan baker.  The French though, have defined their Pain de Levain  in their Decree n° 93-1074 of 13 September 1993 made for the application of the law of 1 August 1905 with regard to certain categories of bread, and included sourdough as follows.

Article 3 — Breads sold under the category of “pain au levain” must be made from a starter as defined by Article 4, just have a potential maximum pH of 4.3 and an acidity of at least 900 parts per million

Article 4 — Starter is a paste made from wheat or rye, or just one of these, with safe water added and salt (optional), and which undergoes a naturally acidifying fermentation, whose purpose is to ensure that the dough will rise. The starter contains acidifying microphone-flora made up primarily of lactic bacteria and yeasts. Adding bread yeast (Saccharomyces cerevisiae) is allowed when the dough reaches its last phase of kneading, to a maximum amount of .2 percent relative to the weight of flour used up to this point.

The starter can be dehydrated provided that the dehydrated starter contains one billion live bacteria and one to 10 million yeasts per gram. After rehydration and possibly, addition of bread yeast (Saccharomyces cerevisiae) under the conditions envisaged with the preceding subparagraph, it must be able to ensure a correct lifting of the dough. The starter can have micro-organisms added to it, authorized by decree of the Minister for Agriculture and the Minister in charge of Consumers, made upon the advice of the commission of food technology created by the decree n° 89-530 of 28 July 1989.