These Menakao Cocoa Nibs are cracked from fine Madagascan cacao beans, they have a mouth-watering, citrus edge and a roasted, fruity flavour, a little like a fruity filter coffee. These nibs contain no sugar at all, and are made with nothing but cacao. They are ideal for a variety of uses in the kitchen.

One of only a few chocolate makers in the world that make chocolate at the source, Madagascar-based Menakao produce a deliciously fruity range of cooking chocolate and cocoa nibs using local beans. 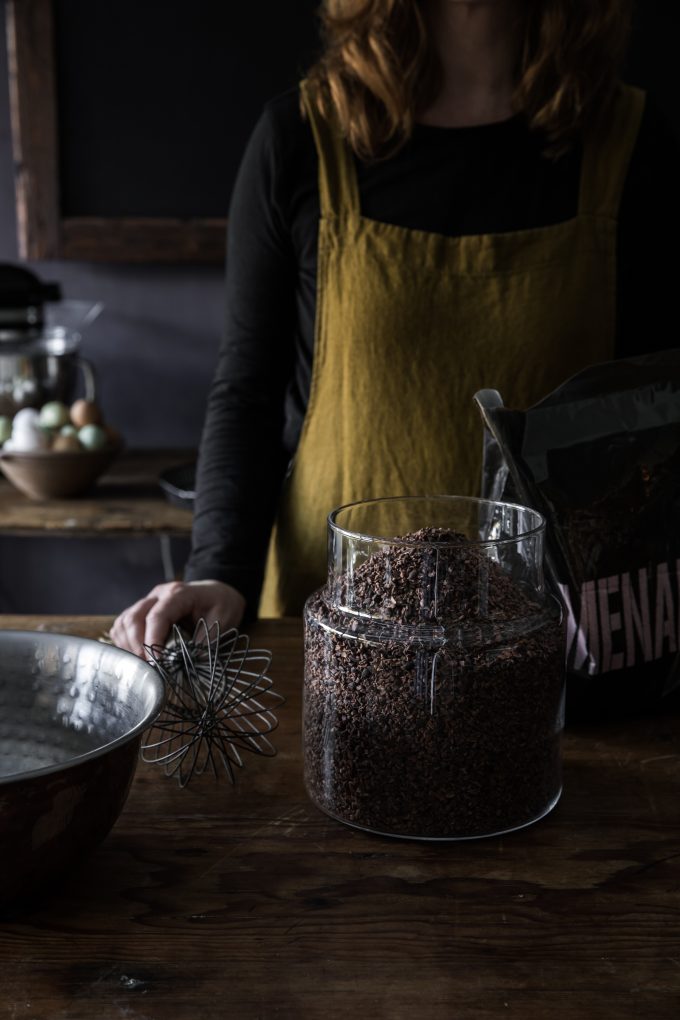 Cocoa nibs are the raw ingredient of chocolate: they haven’t been ground and mixed with sugar yet. The nibs have a recognisable chocolatey aroma but aren’t sweet at all and have a natural bitterness.

Once farmers have harvested, fermented and dried the beans, they are taken to the Menakao workshop. At Menakao, the best beans are hand-selected and roasted then the cocoa beans are cracked into crunchy nib pieces ready to be eaten.

Menakao have managed to coax out an intense, sharp and fruity citrus flavour in these cocoa nibs. The smell alone is reminiscent of orange and cranberries. For those who’ve tried Menakao’s chocolate, the flavour profile will be familiar. But but as the cocoa nibs are not ground or conched, the flavour has a raw, unprocessed intensity.

Cocoa nibs generally have a unique texture, crunchy yet a little tender, somewhat similar to macadamia nuts. For those who have tried 90-100% cocoa content chocolate and found it far too bitter for them, nibs are a little different. Though still intense and a touch bitter the cocoa nibs are milder, with an almost savoury quality.

Not only does this super food taste amazing, they are extremely good for you. Cocoa nibs naturally contain large amounts of potassium, magnesium and fibre. Cocoa beans are considered one of the best dietary sources of magnesium, with 272 milligrams per 100 grams. They also have an average of 9 grams of fibre per ounce.

They can be used as a replacement for nuts and make a great addition to most breakfasts, salads, muffins, pastries, ice cream and even chocolate. Simply sprinkle them on top for an added fruity crunch. Incorporate them in dishes like you would with fresh or dried fruit. Sweet or savoury, the Menakao cocoa nibs are diverse enough to be used in most dishes. Or just have them as they are.

For anyone who love Madagascan chocolate, cocoa nibs are a great way to uncover this origin in its purest form.

These cocoa nibs don’t just taste good, they do good. Madagascan chocolate maker Menakao proudly crafts its chocolate on the island, using only local ingredients. Unfortunately, this is rare even for craft chocolate – it’s estimated that less than 5% of the world’s chocolate is produced in the same country the cocoa is grown.  Making the chocolate in Madagascar in addition to growing the cacao on the island generates about 4-5 times the benefit of Fair Trade for the local Madagascan economy.

One of only a few chocolate makers in the world that make chocolate at the source, Madagascar-based Menakao produce a deliciously fruity range of cooking chocolate using local beans. Read more about Menakao

At the Sourdough School and the Sourdough Club we ensure that we use ethical chocolate in all our chocolate-based recipes. It is so difficult to find truly ethical cooking chocolate for home and professional use in supermarkets and high street shops, so we are delighted to include this range in our online shop. Our Sweet Sourdough recipes can be found on our Sourdough Club website.

If you aren’t already a member you can join the Sourdough Club and learn to bake sourdough with Vanessa online.

Many artisan chocolate makers source their cocoa beans directly from the farmers and farmer co-operatives, cutting out the middlemen and ensuring a significantly higher price, which is more than the Fair Trade premium, for the farmer.

Just as the way grapes are grown and nurtured is critical for the quality of great wine, the same is true for cocoa beans and chocolate. Soil conditions, climate and the care and attention of the farmers and chocolate makers all impact the final product.

The best chocolate often comes from chocolate makers who have a direct relationship with the farmers they buy from. This direct trade also cuts out middlemen and ensures higher payments to cocoa farmers in some of the world’s poorest countries.

The same care and attention to detail also characterises the makers who source these beans and create the cocoa nibs, the bars or the cocoa powder. Whether they’re working out of a small kitchen or a dedicated factory, all these makers are united in the care and attention they make to creating their chocolate.

You can view the full range of Cocoa Runners cooking and baking chocolate, cocoa powder and cocoa nibs in our shop.