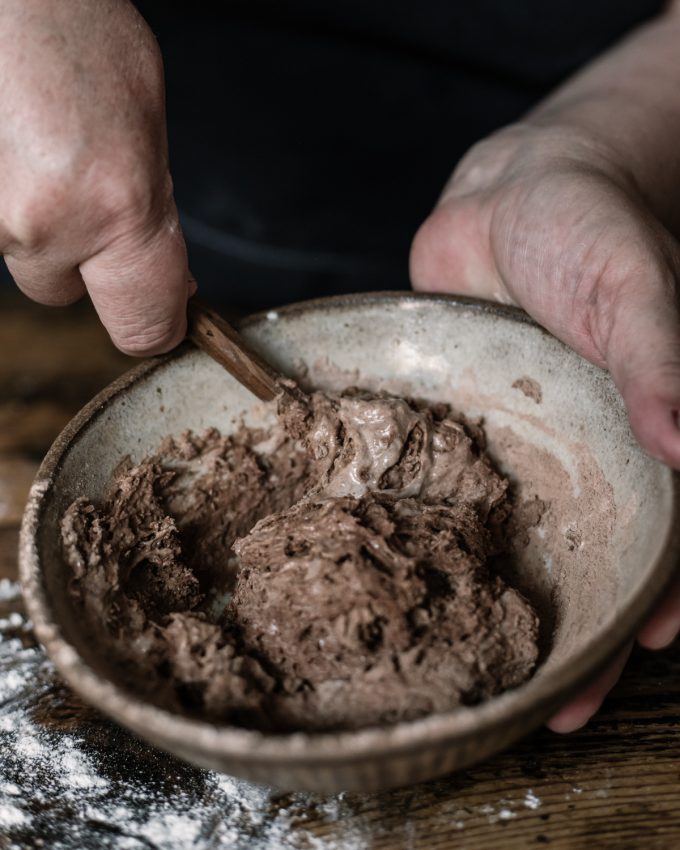 Very occasionally you meet someone who changes everything. So if you have just bought my chocolates starter, here is the story behind it.

In May 2013 my friend, chocolate maker and activist Mott Green, one of the founders of the Grenada chocolate company, gave me some chocolate. Earlier that year I had picked, fermented and processed the cocoa beans and made some of the chocolate set for the cargo destined to be transported to the UK on the 32 meter brigantine. It was a triumphant achievement. The ship came in to port with the most beautiful bronzed crew of international sailors and we loaded 50,000 chocolate on the fair transport ship Tres Hombres. We drank rum, hung out on deck and discussed the future of transport an chocolate. This wasn’t just chocolate; these bars were a celebration of defiance, and a delicious tribute to the resolve of a man who had a vision that challenged the world of chocolate. Mott’s vision was about empowering the workers, paying fair prices and respecting both the people and the land. He talked about the conventional system of cocoa as a commodity as a barbaric system, condoning child salve labour and had done something no one else had ever done. He had produced an ethical chocolate, that the farmers themselves benefited directly from, made by hand, and solar powered and transported on the wind over the sea by fair transport pirates, that tasted amazing. I fell completely in love with his passion, drive and determination.

Four months later Mott and the Tres Hombre ship sailed into Portsmouth in the UK with the chocolate. It was a moment of triumph; success against all odds, and we were there cheering, laughing, drinking more rum, and toasting the future. I recorded one of the most intimate and poignant interviews ever in the hold, surrounded by the chocolate. We talked about the journey, the feelings of elation and the future. A month later, though, just before the BBC radio 4 Food programme, that I had been recording for was due to air, Mott died in a tragic accident. To say that I was heartbroken was an understatement. I was completely devastated, along with Mott’s family, friends and work colleagues.

As you might imagine the bars Mott had gifted that day sat on the shelf in the pantry, untouched, whilst both the world and myself came to terms with the loss of a real life hero.

Two years later and the chocolate was still on the shelf.

I couldn’t bring myself to eat them. It felt as though they were the only physical connection left that I had to a man who completely inspired me. Neither could I leave them to just gather dust and spoil. It was going out of date, and yet I knew that Mott wouldn’t have approved of it languishing on the shelf. Another 6 months passed and I’d been talking to another friend about sourdough flavour and researching the differences between various kinds of Lactic Acid Bacteria when I came across a study identifying some species of bacteria in Cocoa fermentation, and the penny dropped. Mott had told me, as we chatted by piles of fermenting beans that controlling the flavour of chocolate was all about understanding the fermentation of the cocoa beans, and which bacteria took a hold in the process.

This was the answer. I just needed to bring these bacteria back to life, so I used the chocolate, and the cocoa powder to make a chocolate sourdough starter. It’s beautiful lively and appropriately bittersweet, and amazingly complex yet balanced.

We use our chocolate starter starter to make sweet sourdough such as the Pan De Mie recipe. It is beautifully lactic and makes deliciously sweet sourdough. The starter itself tastes sweet, despite there being no sugar, and it seems to retain this sweetness for much longer that any other starter we have at the school.

After eighteen months of using the chocolate starter I sent it to be analysed, and the lab results have confirmed that the ratio’s and species in the chocolates starter are indeed the sweet lactic homofermetative ones I can taste. Looking at the species below it is clear to see that the complex flavours and ability of this starter to come around beautifully, even when slightly neglected is down to the range of bacteria that are from the chocolate and cocoa.

Candida humilis is a species of yeast in the genus Candida.

Lactobacillus plantarum (43%) is the dominant bacteria and it is a homofermentative LAB that is commonly present in both cocoa bean fermentations and sourdough starters. It can grow at temperatures between 15-45?C and at pH levels as low as 3.2. These bacteria normally share a symbiotic relationship with F. pseudoficulneus, one of the other heterofermentative bacteria present in the starter culture.

Lactobacillus sanfranciscensis (38%): was first discovered in 1973 in San Francisco and is a heterofermentative LAB that gives sourdough bread a characteristic sour taste. It is commonly present in most sourdough starters and temperatures of 33 °C leads to maximum growth rates.

Lactobacillus fermentum (16%): is a heterofermentative LAB and can be categorized as the ones best adapted to the cocoa pulp ecosystem. Certain strans of L. fermentum are commonly used in probiotic supplements and have shown to be heat resistant and survive low pH. There are also certain strains of L.fermentum in sourdough have the ability to produce amylase enzymes that are required for the breakdown of starch into simple sugars, which may also help explain why this starter is a lively one.

Fructose pseudoficulneus (12%): is a facultative heterofermentative LAB that has shown to be a well-adapted bacterial species of cocoa fermentation. It has also been shown to survive high temperatures and pH. They generally prefer to utilise fructose as their primary food source producing a mixture of lactic and acetic acid but can also utilise glucose with lactic acid as the main end product.

Acetobacter pasteurianus (8%): Is an acetic acid producing bacteria and is one of the predominant species of bacteria found in cocoa fermentation. During cocoa fermentations, one of the main roles of A. pasteurianus is to kill the germ of the bean to prevent growth. The bacteria also alter several compounds made by other organisms and effectively alters the taste and flavour of the final product. It’s also fascinating to see that pasteurianus is also used in the fermentation process used to produce the traditional Japanese black rice vinegar kurozu.

This post is dedicated to Mott and the friendship we had that me the confidence to put inspiration, knowledge, and the principles of empowering others right at the very core of the courses at the Sourdough School.

You can simply convert your existing starter to chocolate by replacing 20% of the flour with Raw cacao powder.

To buy The Grenada Chocolate Company chocolate and cocoa please go to www.chocolatedetective.co.uk