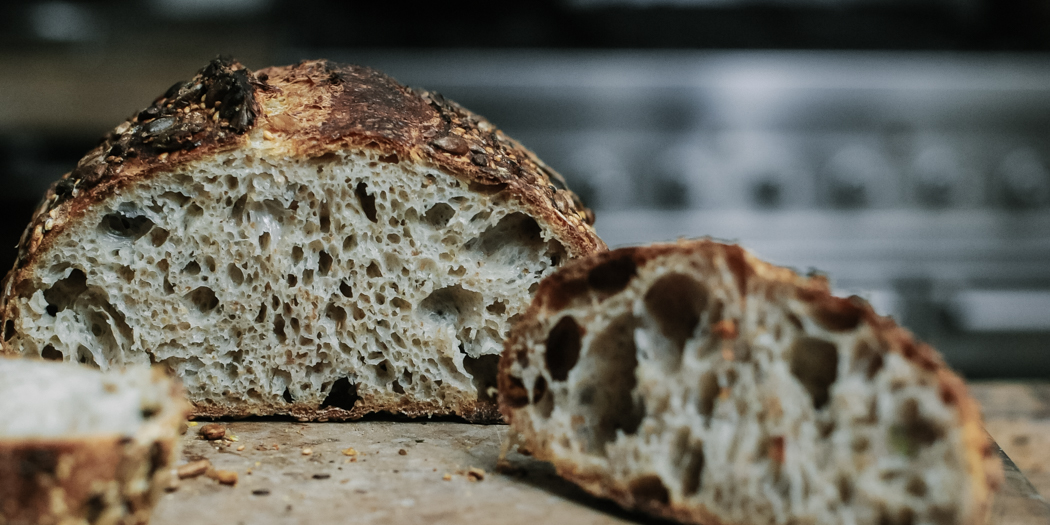 Can you really eat bread if you have IBS? 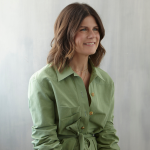 It’s time to look closer at IBS and bread.  This month we have invited nutritional therapist and author Eve Kalinik to share her thoughts on bread, bloating and IBS. Eve writes regularly about food, nutrition and wellbeing for various media platforms with a regular column PSYCHOLOGIES magazine called HAPPY GUT, and hosts masterclasses with THE GUARDIAN on gut health and nutrition.

As I write this it national IBS month, bringing awareness around IBS (Irritable Bowel Syndrome) including diagnosis, treatment and the effect on quality of life, it is also vital to consider education and indeed awareness around some of the misconceptions around potential food triggers.

One of the biggest of these being bread.

Ah bread. For many of us the aroma of freshly baked bread is the epitome of olfactory nirvana. There is a good reason why home sellers use this to entice potential buyers and why supermarkets strategically position the bakery at the front of their stores to lure in customers. Somehow though it has gained some pretty negative PR in recent years and to a degree villainised. But why?

Before we get into actual process of bread making and how that has changed significantly over the past 50 or so years we need to dig a bit deeper and by that, I mean literally getting our hands into the dirt. I’m talking about soil.

Here’s a fascinating and equally humbling fact – one spoonful of soil contains anywhere from 10,000-50,000 different types of microbes, a combination of minerals, organic matter, air and water. It is critical to sustain all forms of life. To put it simply soil is essential.

However, the stark reality is that our soils are becoming severely degraded at an alarming rate to the point at almost one-third of the world’s arable soils are now precariously depleted. Much of this has come from intensive farming and monocultures (farming of one crop over the expense of others) which is often the case for wheat and its derivative flour which is the one commonly used to make most commercial bread.

Is the problem with the wheat we use to make our bread ? 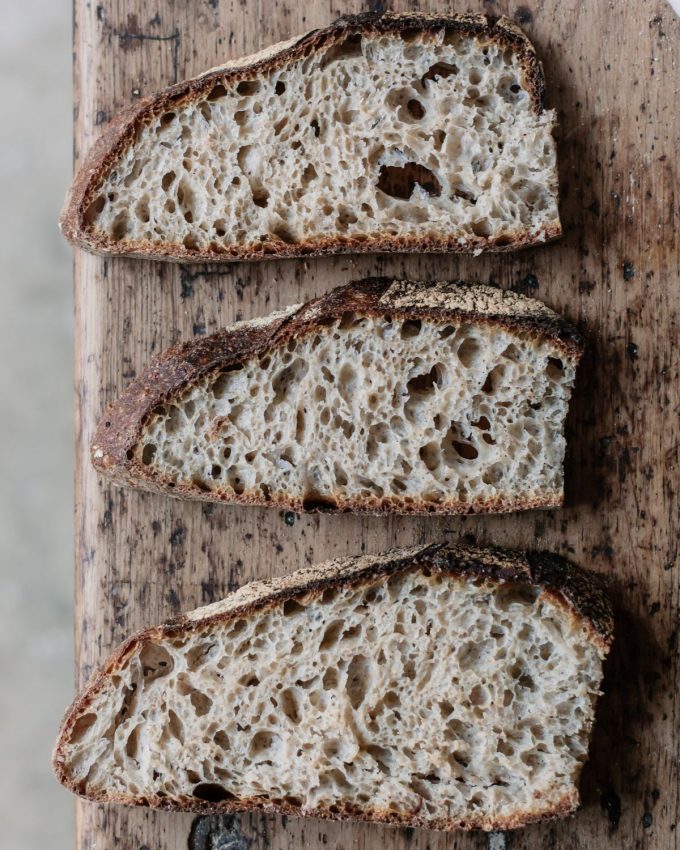 “By removing bread from the diet we may be doing ourselves and our microbes a disservice and ultimately negatively impacting on the health of the gut.” Eve Kalinik

Modern conventional wheat grown in an intensive monoculture farming method from ‘dud’ soil, means the crops need to be replanted for each yield and typically with the heavy assistance of artificial nitrogen, herbicides, pesticides and synthetic fertilisers. In fact, hybrid strains were created just after the second world war to yield more crops using intense application of these chemicals. However, with aggressively seeking higher yields it has significantly reduced the nutritional density, mineral content and increased gluten (a broad term for some of the proteins found in wheat, barley and rye) in the grains. Indeed, it is increased amounts of gluten that have been linked to digestive symptoms associated with IBS and other gut related conditions. We therefore have a perfect storm of poor soil health, rapid turnover and the chemicals used to grow the crops themselves that results in a poor and somewhat warped version of its perennial wheat predecessor, and potentially why our gut may struggle to digest and absorb modern wheat. Conversely if we compare this hybrid conventional stuff with wheat grown in a system that favours sustainable agricultural practise and actively promotes soil health, the crops will be able to regrow without having bio-chemical intervention which means less tilling and degradation of the soil. Mineral content, nutritional value and flavour can all be higher and the protein composition is how nature intended which is better news for our gut. It is this majestic and nutrient dense wheat that nourished our ancestors for millennia after all. Choosing organic grains and flour can bring us somewhat closer to this although going one step further and doing a little bit of research into those that support a more biodiverse farming system is even better.

It is therefore not necessarily the answer to exclude bread from wheat flour altogether unless of course you have a diagnosed gluten allergy like Coeliac Disease in which case you MUST avoid wheat and gluten entirely but for those who exhibit obvious symptoms from eating bread which is the case for many with IBS it isn’t ‘bread’ per se that is the issue. Part of it could be related to the crops that have been used to make the bread but then there is the next stage that we also have to examine in more detail. The process of making bread…

Something changed – but what?

For millennia bread was made simply with wheat flour and a raising agent, typically yeast, that was kneaded into a dough by hand. This was left to ferment for at least 8 hours before being baked. And in the case of sourdough a starter culture used which means an even lengthier period of fermentation. Crucially it is the process of fermentation that essentially breaks down and neutralises gluten proteins in the grain that help us to better digest bread. Then around the end of the 19th century a new process was developed to increase production to an industrial scale that didn’t require fermentation and cutting down time. However, it was in 1961 that bread production ramped up to another level in terms of scale and speed, reducing time from flour to loaf in around 3 hours. This is called the Chorleywood bread process (CBP) and is broadly used for most of the loaves you see sitting on the supermarket shelves. However, as you will come to realise speed comes at a price.

In using the CBP process bread is made rapidly without allowing time for fermentation – ‘no time’ dough. This missing fermentation step means that the structure is very different to those of the breads we ate for millennia and the gluten proteins remain almost intact which can be troublesome for our gut and our immune system. It gets worse, as repeated exposure to these proteins may lead to increased intestinal permeability (aka ‘leaky gut’) that means molecules from foods (and other stuff) essentially ‘leak’ out of gut which elicits an immune response to perceive said food as a ‘threat’ and the ensuing digestive and/or immune symptoms. This is why identifying one food ‘culprit’ can often lead to many more perceived food intolerances when it isn’t actually the foods that are really the issue but more a gut barrier that has been breached and our immune system doing its job. Intestinal permeability has been linked to myriad symptoms and conditions not exclusive to the gut such as mood disorders, thyroid issues and even cognitive health.

Could the additives used in industrial bread contribute to difficulty in digesting bread?

We need to consider the additives that come with the CBP process. Quite an extensive amount as it transpires. Some of these have now been banned but others go under the guise of seemingly tame sounding emulsifiers and preservatives that would not have been present in the original recipe for bread. Bread made in this way, which is majority of those you see in supermarkets, is often referred to as an ultra-processed food (UPF) due to the extensive treatment and additives required to get to the end loaf. Supermarkets may claim that their bread is fresh and ‘baked in store’ and sure they allure you into their stores with the waft of baking but as you can now begin to realise what you smell is not what you get.

It is also some of these same additives mentioned above that can have a disastrous effect on the health of the gut microbiota – the trillions of microbes that live in our gut. Studies have demonstrated that additives like emulsifiers can disrupt the balance of microbes in the gut resulting in less of the good bugs. The gut microbiota has a pivotal role to play in our overall digestive health and imbalances or ‘dysbiosis’ can result in direct symptoms which is often the case in IBS. Unfortunately, because many people suffering with the condition link bread with their symptoms there is a common tendency to remove bread altogether but as we have explored here there is a huge difference to bread made how it was for millennia and the chemically loaded manipulated stuff masquerading as bread on our supermarket shelves.

Could removing bread for your diet cause even more digestive problems?

Furthermore, bread made from good quality wheat flour is abundant with fibre, B vitamins and minerals including magnesium and zinc. And, in the case of sourdough, because of the lengthy fermentation time contain organic acids that ironically and crucially bring so many positives for supporting the health of our gut microbiota. Sourdough also has heaps of umami flavour and possibly why it is so irresistible. So, by removing bread from the diet we may be doing ourselves and our microbes a disservice and ultimately negatively impacting on the health of the gut.

Therefore, it is not about saying goodbye to bread altogether but to recognise how far we have detracted from the real deal. The problem for our gut is not bread in essence but these ultra-processed fake versions. We need to think about making and buying bread with flour that is sustainably sourced and from nutrient dense rich crops. Bread that has been given the appropriate time and patience. Bread that has been made by hand with care and attention. Bread that in the heart of it feeds and nourishes us and our gut on so many levels and has done for millennia…’real’ bread.

Sourdough studies used in this article.

Eve’s  first book BE GOOD TO YOUR GUT was published in 2017 and her second, HAPPY GUT, HAPPY MIND was released in August 2020 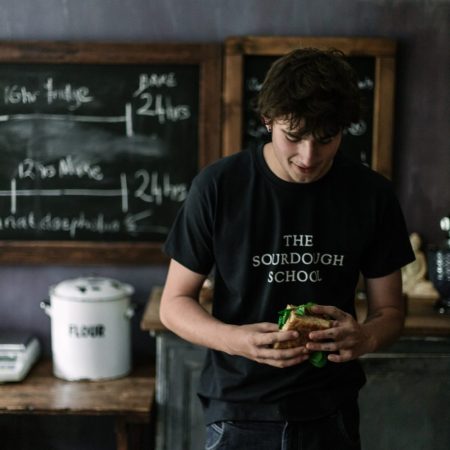