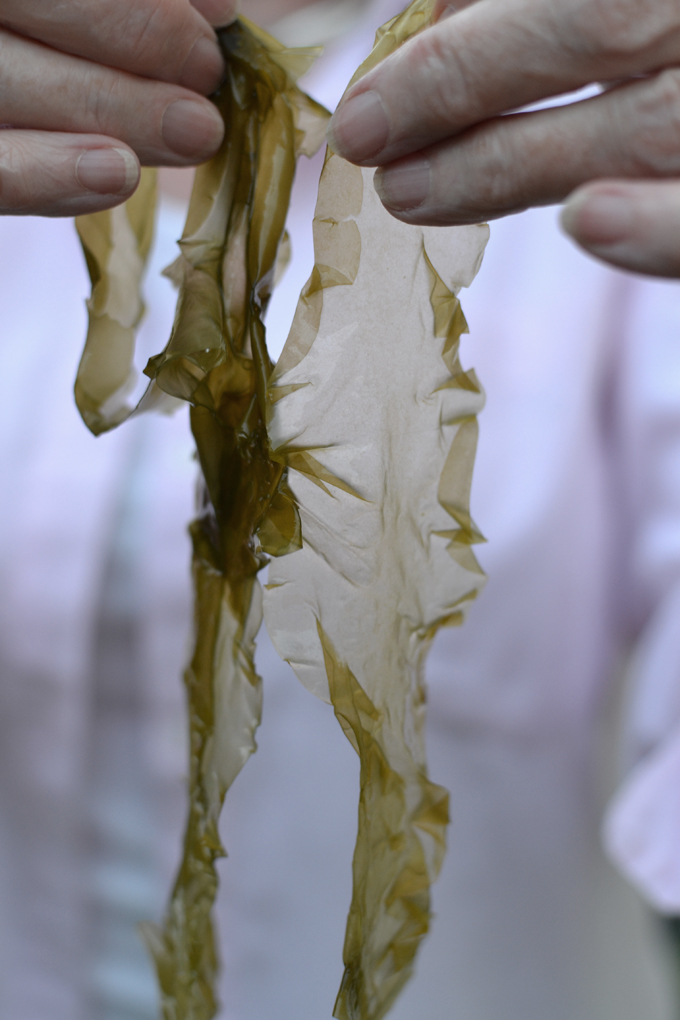 Seaweed is a fantastic source of calcium, folate, iodine, and magnesium as well as being rich in B vitamins.

I have a special interest in sourdough and nutrition – it fascinates me and in the summer of 2014  my ears pricked up when I posted some sourdough starter to a lady called Fiona author of The Foragers Kitchen in the Outer Hebrides.  She explained to me  that adding seaweed to her sourdough was a great way to boost minerals in your daily bread.  She was writing a book called Seaweed in the Kitchen.  In return for the starter she kindly sent me back some fresh seaweed, which arrived in an envelope some days later. It was beautiful stuff. The most delicate green colour and it smelled like the beach on a spring morning.  Fresh and briny.

Sea weed is mineral rich and seaweed has full access minerals at levels that many commercially produced vegetables that are grown in nutrient-poor soil do not have. Seaweed is also a fantastic source of calcium, folate, iodine, and magnesium as well as being rich in B vitamins. For me baking sourdough isn’t just about eating good bread.  It’s about optimising the nutitional value of the food we eat, so adding seaweed is a wonderfully sustainable way to do this.

Later on that summer I met Tim, one of the founders, of Cornish seaweed company through Captain Arjen Van der Veen of the tres Hombres in Falmouth. Since then I have always recommended using their seaweed, not just because of the fact it such a great product, but that they are great people too, with principles. The kind of people I really like. So here is the video that tells you a bit more about them.

So how do you add seaweed to sourdough?
It’s really simple to add seaweed to sourdough. The sea weed arrives dried.  It is easy to rehydrate and then I keep the seaweed fresh in the fridge in some slightly salted water, which I also used in the loaf and simply chopped the seaweed up and added it after the initial mix of flour and water. (I only used a small amount of seaweed, but for anyone wanting to reduce the amount of salt in their loaf adding a good couple of tablespoons of seaweed instead would would be a fabulous salt substitute.)

The result? Well I was expecting some objections from the family, but surprisingly the result was a mild flavour, that complimented both cheese we enjoyed with it and the carrot soup the following day wonderfully.

You can buy fresh seaweed from www.cornishseaweed.co.uk