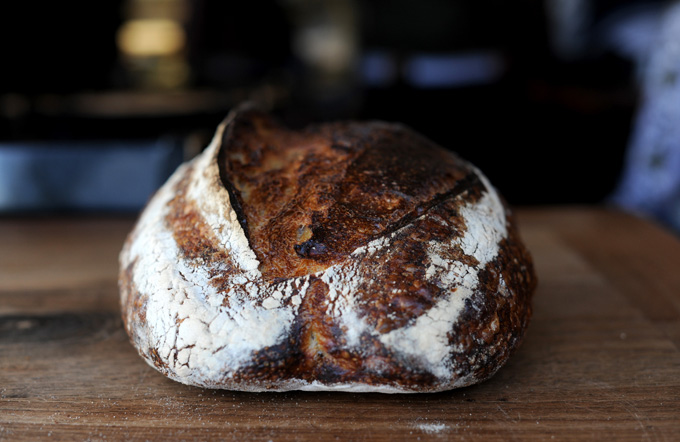 The loaves of bread are made daily

One of the most frequent questions, I am asked, is what the difference is between San Francisco style sourdough and French-style pain de Levain. I have a pretty good understanding of French pain de levain, it is practically in my blood, but really to get under the skin of how Californian sourdough is different and finding out what the differences are, meant actually spending time in the bakeries and chatting to bakers about their processes, the flour, and the timings, and eating lots of sourdoughs.

So when the opportunity came up to interview Chad Robertson and spend time in San Francisco at Tartine on 18th in The Mission and meet other bakers in San Francisco, I was delighted. Over the coming weeks, I will share some more details of the trip, but mostly all of the recordings and photos have been sent over to the team at the BBC Radio 4 Food Programme, for a special programme on sourdough next year… and for that, you will have to be patient…. scheduling good things come to those who wait. 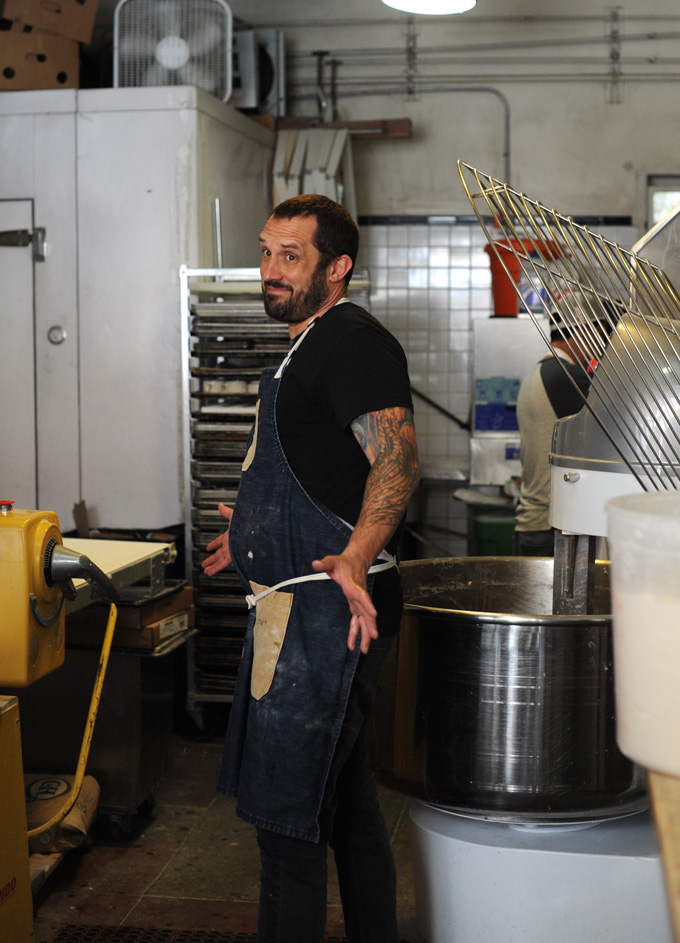 At the centre of the team is Richard Hart, Tartine’s head baker, he and his team make all the bread and develops the recipes, including the ones in Tartine 3 – he is Chad’s, right-hand man

So in the meantime, I have been asked so many questions since I got home about my trip and rather than reply individually I thought I would answer all the questions here:

Whilst you were there did you spend time with Chad Robertson? 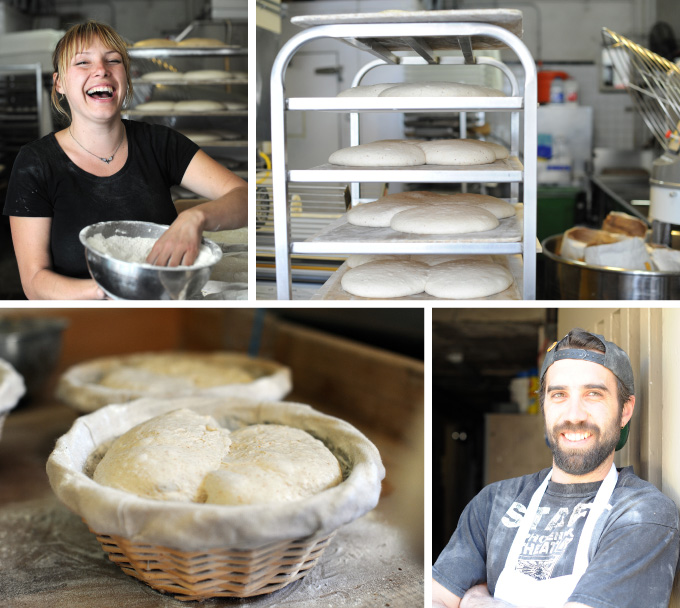 Not much. It was somewhat strange.  I flew over specifically to meet Chad, and to do the recordings for the BBC, but he was so busy that his PA sent an email to as I arrived from the UK say that Chad was actually in Italy when I arrived at the bakery! Instead, I hung out with Richard Hart and the sourdough team.

Was Tartine bread the best you’ve ever had?

Truthfully, yes.  It was the best ever. The loaf that was outstanding were actually the porridge loaves, which Richard developed the method for after ” standing in line in a bakery in California chatting about porridge with a genuine 1960’s hippie.” Richard very kindly shared the technique with me, I think that the porridge bread is possibly the best Sourdough in the world.

Will you be sharing or teaching the Tartine Method?

No. I think each baker has their own method. I teach Nutrition & Digestibility and everything you need to know about baking Tartine bread is already in Chads books. Buy them; they are brilliant.

How does the traditional French method differ from the Californian method?

There are some significant differences. Primarily it is down to hydration and length of fermentation, temperature, and the shaping techniques, although there are differences in the flour too. The French sourdough is fresher in general. San Francisco celebrates the sour, but there are exceptions. The Tartine loaf is French-style fresh, but with higher hydration and a deeper, more complex flavour, moister crumb and bien cuit crust. I will write a fuller article on this in the future. 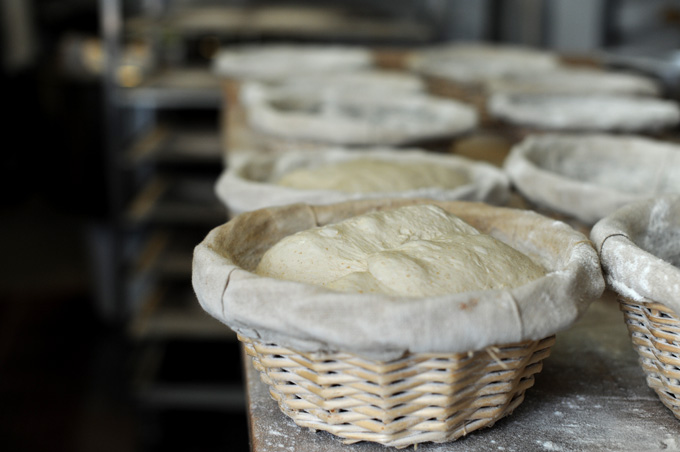 Richard’s bread. Who is actually British, from East London. As you might well imagine he has a great work ethic equalled by a wicked sense of humour and an unrivalled knowledge of naturally leavened bread

What do you most enjoy about the bakeries?

I loved meeting the bakers. In particular, I absolutely loved Kathleen, at Della Fattoria. She is a warm, strong, generous woman, I wanted to stay longer and learn from her. Meeting Steve from Acme Bakery was wonderful – you can expect a longer article on Acme soon. I found Belinda at Patisserie B warm and funny and possibly baking better French patisserie than the French! Spending an afternoon with Michel Suas from The San Francisco Baking Institute was also a huge privilege.

What was the highlight?

I don’t think there could be a baker in the world who wouldn’t agree that hanging out with the Tartine bread baking team is about as cool as baking gets. It was just as amazing as I had hoped for. After a few days, I found myself inadvertently calling the bakery Tar – team. It is a tight space to work in, but there is a real buzz and an equal balance of male and female bakers, which was fantastic. (It was so male-orientated when I was training.) I especially love Chrystal and her sense of mischief, and Eris as well and the front of house staff who looked after me, with strong coffee and pastries when I was feeling a bit tired and homesick. The bread team are seriously good at what they do, but they also laugh, and mercilessly take the mick out of each other in that affectionate way that people do when they are more like family than family. It was a reminder of how good it is actually to work in a bakery; the banter, camaraderie and the laughter was infectious. Truthfully, I felt quite tearful leaving, I really miss that kind of atmosphere and energy. 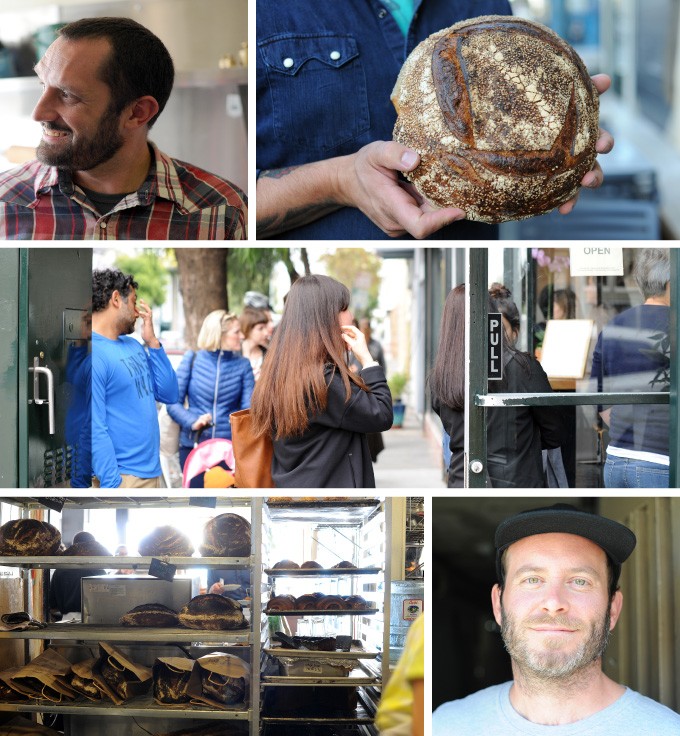 Richard Hart Running the Sourdough Bakery At Tartine for 7 years

At the centre of the team is Richard Hart, Tartine’s head baker, and Chad’s right-hand man. Richard is actually British, from East London. As you might well imagine he has a great work ethic equalled by a wicked sense of humour and an unrivalled knowledge of naturally leavened bread. As a hands-on manager, he bakes from the heart and can be found working with the dough as part of the production team. Having the chance to stand back and observe, it is clear that Richard also never stops thinking. His knowledge is accentuated by a creative streak, and you can practically hear his mind ticking as he develops ideas and flavours with an instinct I have rarely seen before;  it didn’t come as a surprise to realise that it was Richard who developed the bread recipes in Tartine’s third book. So, to answer the question … the absolute highlight of my trip was doing some recording with Richard. Just being around such an amazing baker was inspiring: for me, there is no greater gift than inspiration.

Did you get to meet Chad Robertson in the end?

Yes. Chad popped into the bakery on a couple of days. It seemed that absolutely everyone loves to stop and chat with Chad.

So I got to chat for about 20 minutes, during which time I met half of the neighbourhood, almost everyone who walks past stops to pass the time of day. It’s actually a warm community, and Chad seems very much part of it. We met three times over my stay and eventually I recorded some interesting audio, but as you might imagine he’s was incredibly busy and in Rome for the first part of my visit. He is in the middle of an exciting new project building large versions of the bakery.

Did you get your books signed by Chad?

Do I have some Tartine starter?

Yes…Will I be selling it? … er no…but I am happy to gift starter to anyone who wants to bring a pot to me for personal use only.

Did you visit any other bakeries?

I managed to visit about a dozen other bakeries, tried the sourdough, and met the bakers from Acme Bakery, the San Francisco Baking Institute, Patisserie B, Della Fattoria, Craftsman and Wolves, Arizmendi Bakery, Boudin Bakery, Nightingale Bakery, The Neighbour Bakehouse, and several others, all making fabulous sourdough.

What did you think of Boudin Bakery?

It was not to my taste. That is all I’m saying.

Did you learn anything new about sourdough?

Yes, lots, there is always something to learn, especially about the future of sourdough and the direction of artisan bread. I think one of the key things was learning about the flour, and observing the production methods first hand. I learnt a lot about the history of sourdough from bread historian and author William Rubel. William and I have been chatting on his bread history group for a couple of years and he has a unique insight into the history of bread. He is utterly gorgeous, and I can’t thank him enough for coming to meet me… William is currently writing a full history for the University of California.

What idea’s will you use from your trip?

The most important information was the full picture of San Francisco Sourdough, but the idea’s that most inspired me were actually from Tartine Bar.  The food was absolutely incredible, and I found myself pouring over a recipe book that had sat and languished on my bookshelf for a long time. The whole approach set me on fire, so ironically it wasn’t so much the sourdough, but the extension of the fermentation that I will integrate into what I do here.

Will you go back?

After tasting such amazing bread I am not sure I could resist returning.