Sourdough and the human gut microbiome:

When I had to give up my career as a baker no one could provide me with the answers as to why I could no longer eat wheat. It was 1995 and I knew that there was an answer but it took almost 2 decades of science catching up to provide me with the answers. My personal fascination with fermented food, and naturally leavened bread came from trying to resolve my own digestive issues. Being a baker with a completely compromised digestive system was challenging and in the end heart broken and frustrated I was forced to leave my profession ..

Throughout my teens doctors had enthusiastically prescribed me antibiotics, ironically for a health issue that as it turned out not to need them. I had antibiotics for glandular fever in my second year at university, again it was an illness that does not respond to antibiotics. When I had my three children by cesareans, (I might add that this was not through choice.) I was also given routine antibiotics to prevent wound infection. Shortly after the birth of my second child I was given another dose for a wound infection, and again after my third child. So, I have counted over 12 lots of antibiotics that I remember taking, but if I add in the ones my mother recalls I had as a child, I have probably had nearer to 20 prescriptions.

Age 24 I had stopped baking completely. It broke my heart, but I changed direction and started my own non-baking related business. I was busy, working extremely long hours and I ignored my health despite feeling ill. I was unable to eat so many foods, including bread that I had a list of suspected intolerances that included almost every food you could think of.

I was desperate for answers. I visited nutritionists, doctors, and several total wackos in an effort to find out what was wrong. I gained weight and I felt tired al the time. I was told I had IBS and leaky gut, that allowed particles of undigested food to enter my bloodstream, which then set up an immune response to the proteins.  The only solution that was offered was to exclude foods that irritated me until I had healed. I dutifully excluded the foods that upset me but it was almost impossible and I felt tired, I was bloated, my joints ached, my brain was cloudy and gained weight year on year, despite my best efforts to eat healthily.

I had long suspected that the daily challenge of eating food that did not make me feel dreadful was due to a compromised gut flora as a direct result of the sustained attack on my own microbiome from the all the antibiotics. 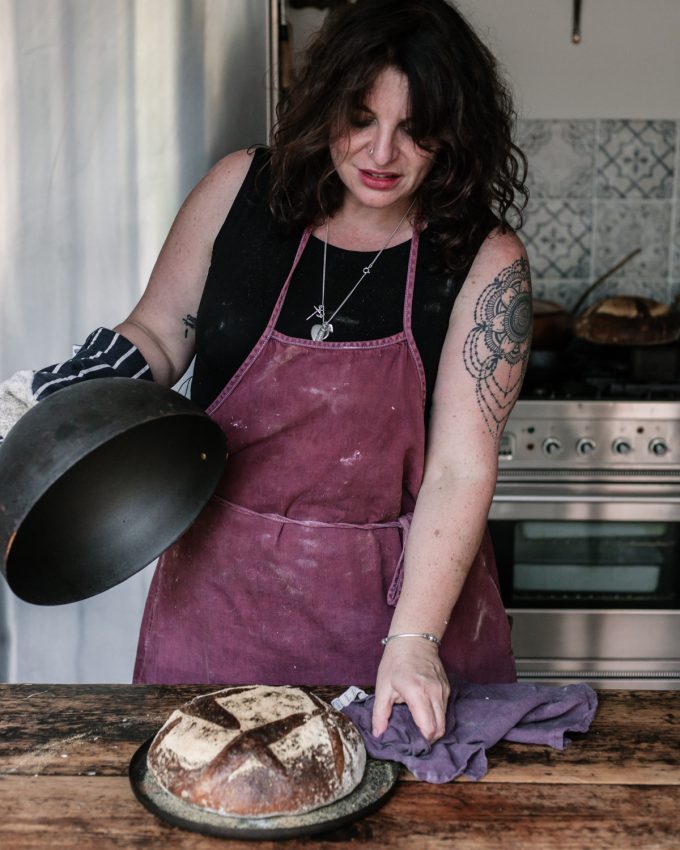 So how did this relate to naturally leavened bread?

By the age of  27 I had avoided eating bread or wheat for almost 4 years when I went back to my home in Southwest France. I walked past the bakery I had grownup baking in, smelt the freshly baked bread and caved in. I bought a warm miche, took it home, and despite knowing I would be ill for days, I cut huge chunks of it off and I ate almost the entire loaf in one sitting. It was comical really. In less then 20 minutes I’d eaten almost my bodyweight in bread and cold salted French butter but it was, I decided, worth being ill for.

I was not ill though. To my complete surprise I was fine. I reckon doubled Herve’s (the baker’s) profit that August. I returned to the UK, ate bread, and was promptly ill. I was shocked.

WHY COULD I SOURDOUGH?

What was going on?  In 2001 I began to research why I could eat the French bread but not the English bread. There was very little information available, but it soon became apparent I could eat the French style long slow fermented bread using wild leaven without any symptoms. I couldn’t understand why?  I initially thought it was the flour, but discovered this was not the case.  My GP could not offer an explanation as to why I could eat sourdough but not “normal” bread. There were other issues too. I could eat yogurt, but not drink milk, I could eat cheese, but not enjoy cream. I could eat sauerkraut, but not coldslaw. I had the solution -if it was fermented then I could eat it, but that wasn’t enough. I could not just accept that fact I could eat fermented bread and foods. I needed to know why. It was that personal frustration and the absolute need to understand, that became the driving force behind trying to resolve my food intolerances and understanding fermented foods, and in particular how long slow fermented bread could support our health.

In early 2015 whilst researching The Sourdough School book  I came across the work of Tim Spector  – some of you might have heard Tim speaking on the BBC Radio 4 Food Programme on the human gut microbiome.  I was absolutely captured by what I heard… the that was ground breaking.  The interviews answered part of the missing jigsaw puzzle of why people’s gut microbes were compromised and perhaps I wondered if it would help explain why people became wheat intolerant and more importantly  how we can prevent this from happening in the first place.  So to find out more specifics I visited the Department of Twin Research at King’s College, London last week to meet with professor of Genetics Tim Spector the Author of The Diet Myth.   I wanted to find out more about the thousands of misunderstood microbes that live in our body, and talk about how the microbes in sourdough can support our micro biome.  I want to further develop sourdough that helps to maintain a healthy gut microbiome, and investigate how we can perhaps prevent or even reverse a gluten / wheat intolerance.

Like me, Tim embarked on a personal mission, after a health scare, which resulted in a brilliant that book goes a long way to answering how our diets and lifestyle have had huge implications our overall health and wellbeing. He highlights research that has found links between imbalances in the gut microbiota and problems such as obesity and diabetes to autoimmune diseases, and even autism, and depression, with a unique insight from his twins studies over the past 20 years. He presents evidence that we, First World eaters have brought some of these problems inadvertently on ourselves—by loosing too many “good” microbes, through our overzealous use of antibiotics, processed foods, and antibacterial sanitisers.  The book provides practical well researched information and examples on how we can improve our own health through supporting our gut microbes. Our microbiome is it seems as important as our hearts, our lungs or our liver. It is essential to our health. 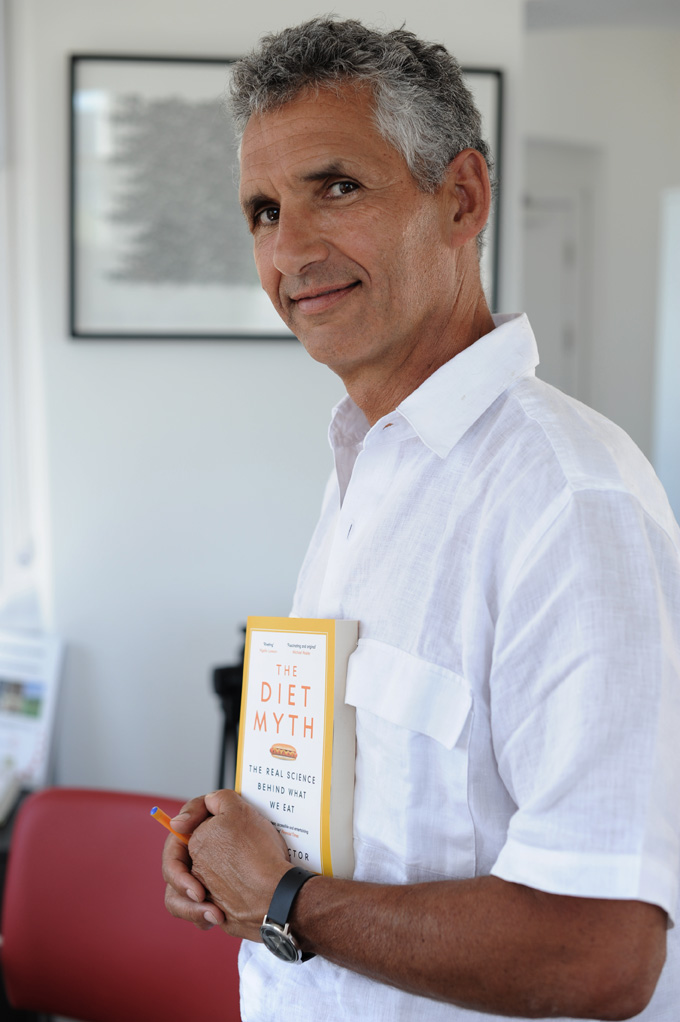 Professor of Genetics Tim Spector the Author of The Diet Myth

As a baker, who uses microbes to make my bread I have began  investigating the role of microbes in sourdough many years ago because I knew that making a good sourdough means looking other the microbes in the pot.  In so many ways understanding a sourdough starter is similar to understanding the human gut micro biome; it is a certain set of conditions in which it flourish and so it makes absolute  sense to me that our gut microflora need nourishment and nurturing to thrive.

.. in that that Lactobacillus found in starters, which is the other half of the symbiotic relationship of bacteria and yeast exists as part of our own personal flora.  I am also convinced that there is a even deeper connection .. fermenting flour /wheat is the way we have always  eaten bread. The process of fermenting breaks down gluten, facilitates more bioavailability of the key nutrients, fibre, polyphenols & minerals in flour that support microbial health, and studies have shown that fermenting bread slows down the rate of assimilation of carbohydrates that helps control blood sugar.

So whist looking at our own gut microbes is an area that might make some bakers feel uncomfortable, I find this fascinating. Baking sourdough  – using wild microbes and wholegrain flours is potentially a way to support a healthy gut microbial diversity and in turn wellness.

So if you are interested in understanding an invisible world of microbes, and how they affect our ability to digest our food then I highly recommend reading Tim’s book the Diet Myth. It’s brilliantly readable and goes a long way to explaining how a diversity of food supports our digestive system, and our overall health, which makes it is a great foundation in comprehending how fermented foods, and in the mean time I will be working on researching the specific mechanisms by which sourdough has a positive role to play in supporting our human gut micobiome.

January 2019 – update – So I am now studying for my PhD  – I have much more I want to understand and conducting my own research is essential to understanding the importance of sourdough and gut microbial health .. it is a lifetimes work and the more I learn, the more I find that there is to know.