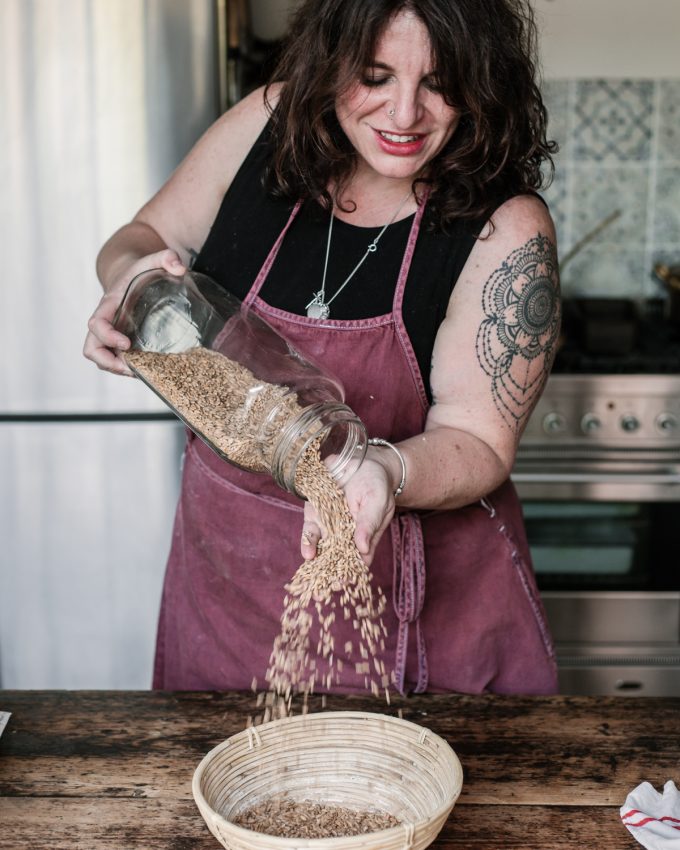 We don’t always use 100% wholemeal at the Sourdough School when we teach, but you would rarely ever find us baking a loaf without any wholemeal flour, not least because of the amazing flavours, fibre and extra nutrients wholemeal flour brings to sourdough loaves. One of those vitamins is the antioxidant Vitamin E, found in the wheat germ. The germ is the part of the wheat kernel that actually germinates, in other words, it is the part that turns into a plant. The majority of the kernel’s fat is found in wheat germ. It is the most nutrient-rich part of the wheat. Although wheat germ makes up only about 2.5% of the grain by weight, the wheat germ is a nutrient-dense source of vitamins, minerals, fatty acids and fibre. Vitamin E is one of the key nutrients found in wheat germ, and it turns out to be a bit of a superhero among vitamins. It is a fat-soluble vitamin, or in fact a group of fat-soluble compounds, that has been linked to protecting against the effects of free radicals and boosting the immune system.

Vitamin E is an antioxidant, effective in neutralising free radicals.

So what is a free radical?

A free radical a highly reactive molecule that is missing one or more of its electrons. The oxidation reactions that occur as free radicals acquire the electrons they are missing have been linked to a number of the degenerative diseases associated with ageing, including cancer, arthritis and cataracts. They bounce around the body, causing damage, to others cells as they look for a spare electron they can steal. As an antioxidant, vitamin E is able to donate an electron to a free radical, calming it down and helping to stop the free radical damage. The antioxidant properties of vitamin E are largely associated with protecting cell membranes. In this sense, vitamin E is linked to the prevention of cancer, heart disease, dementia, liver disease and strokes. In addition, there is evidence that vitamin E can stimulate the p53 gene, whose function is to suppress tumour development, giving it a further anticancer function.

Vitamin E also has important functions in maintaining healthy cardiovascular and immune systems. It has a role in the formation of red blood cells, helps to widen blood vessels and inhibits platelet aggregation which help stop the formation of clots. By stimulating the body’s natural defences, it also aids in protecting against viruses and bacteria. Vitamin E, has, along with other antioxidants, has been shown to give protection against developing age-related macular degeneration.

A deficiency in vitamin E is actually very rare and usually only seen in premature babies and people with digestive disorders which result in difficulties in breaking down and digesting fats. Deficiency symptoms include poor muscle coordination, problems with vision and, in severe cases, the inability to walk. The recommended daily intake of vitamin E for adults is about 15mg per day, less for children, more for breastfeeding women. Being fat-soluble, vitamin E can be stored in the body, so reserves can be drawn on if this amount isn’t available from your diet every day. Good dietary sources of vitamin E are vegetable oils like corn or olive oil, nuts and seeds, and wheat germ. There is a lot of evidence that vitamin E interacts with other vitamins and minerals and that a diet rich in micronutrients, vitamin A, vitamin B3, selenium and glutathione is needed to support and optimise its health benefits.

Vitamin E is important in protecting our cells and tissues against free radical damage and promoting good health by supporting our body’s anticancer and anti-inflammatory defences. It is needed for the formation of red blood cells, and protects against a whole range of diseases… well, I did say it was a superhero.