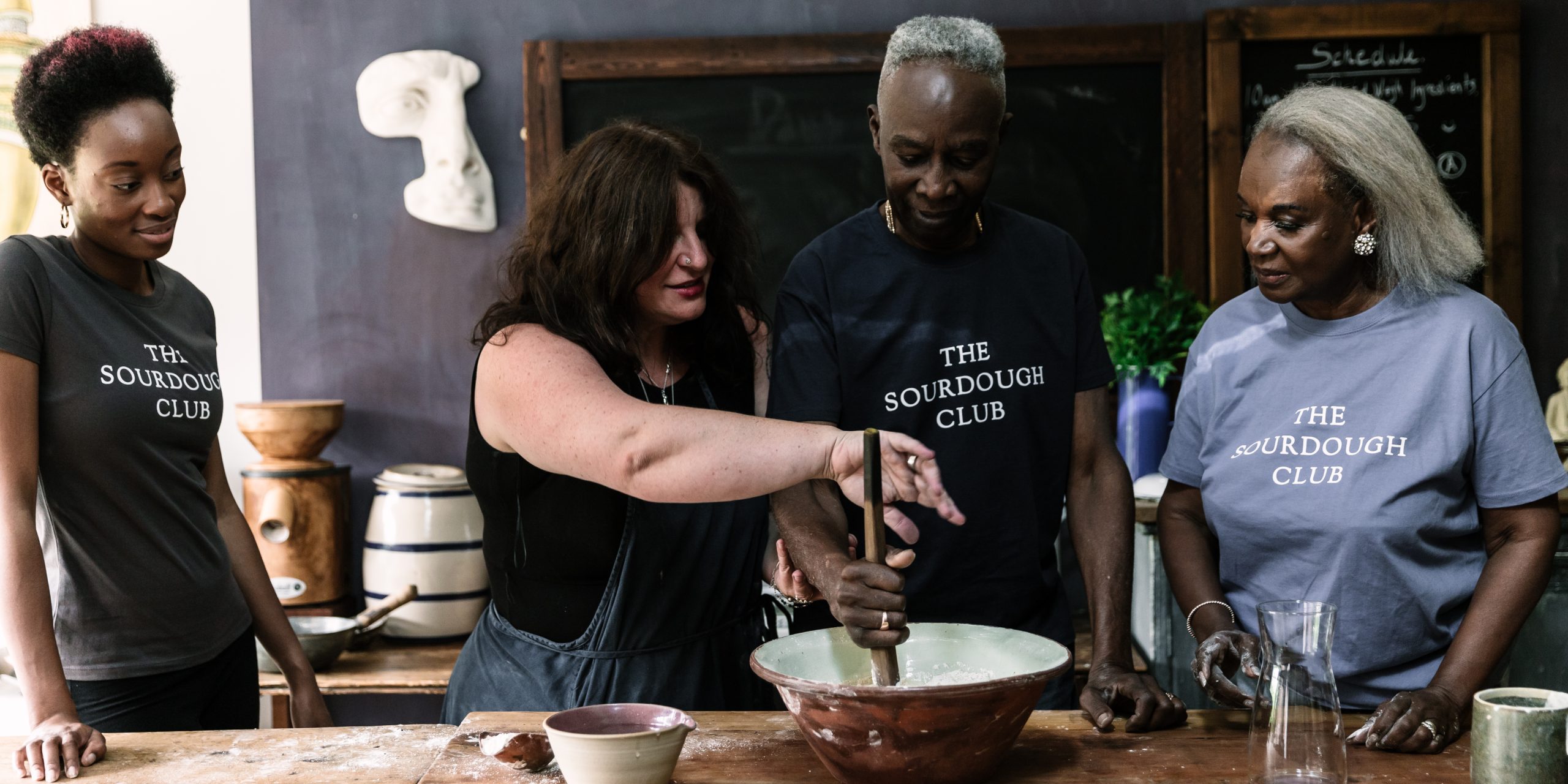 Suddenly it is September – Sourdough September and our teaching year begin…

My Botanical Blend No. 2: Meadow Blend  launched this week, and so too did my new book, 10 Minute Sourdough. It’s been a busy week – not just for me but for most people, with the new school year beginning. It is also the last week before applications close for our one-year online Sourdough Diploma. So this is a ‘sit down with a cup of tea’ kind of feature. It’s a ‘think about your everyday bread’ article that delves deep into the latest research and thinking about bread and how eating decent bread might just save your life… and now there is absolutely no excuse not to make it, either.

What is in sourdough?

You can thank the live microbes in sourdough starters for the bread’s uniquely delicious taste. But those teeming microbes don’t only create wonderful flavours.

Sourdough’s fermentation process helps to break down the flour, making it more easily digestible, and also increases the bio-availability of nutrients, making the bread more nutritious. In addition, the fermentation process means the bread does not require any artificial ingredients or preservatives. We encourage a wide diversity of ingredients in our bakes – some of our bread recipes contain 20–30 different ingredients, some freshly milled, some as inclusions. The end product, also high in fibre, is not just food for you, but an excellent source of ‘food’ for the different good bacteria in your gut. We always advise eating your sourdough with some ‘probiotic’ foods, such as kimchi or sauerkraut, or any other live and fermented foods to help supply even more good bacteria to your gut.

A host of new scientific studies shows that by feeding your gut microbes with a healthy and diverse diet, you can improve the strength of your gut microbiome, which in turn can help to optimise your body’s vital immune defences. That should mean you have less risk of contracting viral and bacterial infections. But the life-enhancing benefits don’t stop there. Having a healthily functioning immune system means your body is less likely to develop chronic body-wide inflammation, which is a critical culprit in common killer diseases such as heart disease, type 2 diabetes and cancer.

The COVID-19 pandemic has alerted us all to the vital importance of having a robust immune system. But COVID fear has also prompted quacks and profiteers to make a host of over-hyped and dodgy claims about things we can swallow to ‘boost’ our immune defences, such as expensive brands of vitamins and minerals. Recently, investigators in the British Medical Journal published a convincing takedown of such bogus sales claims.

Even if you really could ‘boost’ your immune system’s bug-killing powers, you wouldn’t want to.

As Dr Suzanne Cassel, an immunologist at the highly respected Cedars-Sinai health research organisation in Los Angeles, says: ‘You actually don’t want your immune system to be stronger, you want it to be balanced. Too much of an immune response is just as bad as too little response.’

Our bodies need to keep the immune response healthily reined back, like a guard-dog on a leash. Otherwise, our immune defences can turn rogue and attack our bodies, causing agonising afflictions, such as arthritis, inflammatory bowel disease and other autoimmune conditions. So we need to keep our defences not only strong but also under control. But how? Scientific opinion increasingly points to one answer: it’s all about the bacteria living in your gut. And that’s exactly where sourdough can work its magic.

There are about as many individual bacteria living inside you as there are human cells. They comprise around 10,000 different species, which can be both good and bad. Together, they carry about 1,000 times as many genes as you do. The bacteria in your gut aren’t just sitting there, living independently. They play a crucial role in breaking down your food so you can absorb it. They also interact with our bodies and brains through chemical signals. Studies show that these can help or hinder the immune system’s regulation. Numerous reputable scientific reports agree that having a richly diverse and healthily balanced population of bacteria in our guts can support our immune-system defences’ constant fight against infection. To quote an international study in the journal Frontiers in Immunology in 2013: ‘The intestinal microbiota play an important role in pathogen resistance, both by direct interaction with pathogenic bacteria and by influencing the immune system.’

Conversely, gut-bacteria populations that are low in diversity and high in infectious bugs that produce toxic substances are strongly associated with immune-related diseases such as asthma, inflammatory bowel disease and type 2 diabetes. One particular danger of having high levels of toxin-producing bacteria in the gut is that they can weaken the stomach’s walls, allowing toxic substances to leak into the bloodstream. This, in turn, causes chronic inflammation throughout the body, which then continually damages our cells, as well as organs such as the heart. Fermented sourdough may help us to prevent all of this, according to an important new study by investigators at the Stanford University Prevention Research Centre in California.

Their study of 36 healthy adults over ten weeks, published in July 2021 in the journal Cell, concluded that ‘a diet rich in fermented foods enhances the diversity of gut microbes and decreases molecular signs of inflammation’. The more fermented foodstuffs people ate, the better the results. One of the study’s authors, Dr Justin Sonnenburg, an associate professor of microbiology and immunology, says: ‘This is a stunning finding. It provides one of the first examples of how a simple change in diet can reproducibly remodel the gut microbes in a cohort of healthy adults.’

The study reports that eating fermented food in particular seems to reduce the activity of a potentially harmful type of immune cell called interleukin 6. This has been linked to both chronic inflammation and conditions such as rheumatoid arthritis, type 2 diabetes and chronic stress. What’s the magic in fermented sourdough that can help to achieve such great results? It’s early days, but scientists are beginning to understand the powerful ways in which the teeming microbes in sourdough starters can individually benefit the bacteria in our guts. Microbes do the basic work of fermenting sourdough. As a report by the American Society for Microbiology explains, these microbes include lactic acid bacteria and yeasts. The yeasts cause the dough to rise by creating carbon dioxide bubbles. The lactic acid bacteria provide the sour flavour (in the form of acetic acid and lactic acid) and preserve the bread by lowering its pH, which prevents the growth of food-borne pathogens. Those microbes don’t stop there. They go on to benefit our gut health by helping to bolster the populations of good bacteria in our intestines.

Just who are these microbes? Scientists are beginning to find out. In 2020, for example, international researchers from six countries reported on a species of lactic acid bacteria that is frequently found in sourdough. It is called Lactobacillus fermentum, and it is known to foster great flavour and texture. In the journal Critical Reviews in Food Science and Nutrition, the investigators report how laboratory studies show that L. fermentum can help to optimise the immune systems of people who have it living in their guts. What’s more, it can also protect them against harmful microorganisms. This helps to explain why having a strong population of Lactobacillus genus is associated with being better protected against catching respiratory and stomach infections, says the report. Scientists are also particularly interested in this Lactobacillus’s ability to kill other, toxic, bacteria. They hope to develop it into an alternative to conventional antibiotic drugs. Finally, the international report says that L. fermentum strains have also been found to decrease cholesterol levels in people’s bloodstream, and may even be protective against colorectal cancer.

L. fermentum is only one of the untold numbers of beneficial bacterial types found in traditional sourdough breads the world over. Another, Lactobacillus plantarum, has been found to help significantly reduce the levels of two inflammation-promoting immune system substances, interleukin (IL)1-beta and tumour necrosis factor (TNF)-alpha. Moreover, says a 2020 report in the journal Nutrients, laboratory studies show that L. plantarum can, ‘dramatically change the gut microbiota, suppressing pathogenic and pro-inflammatory microbes and stimulating the microbes that may prevent weight gain’. 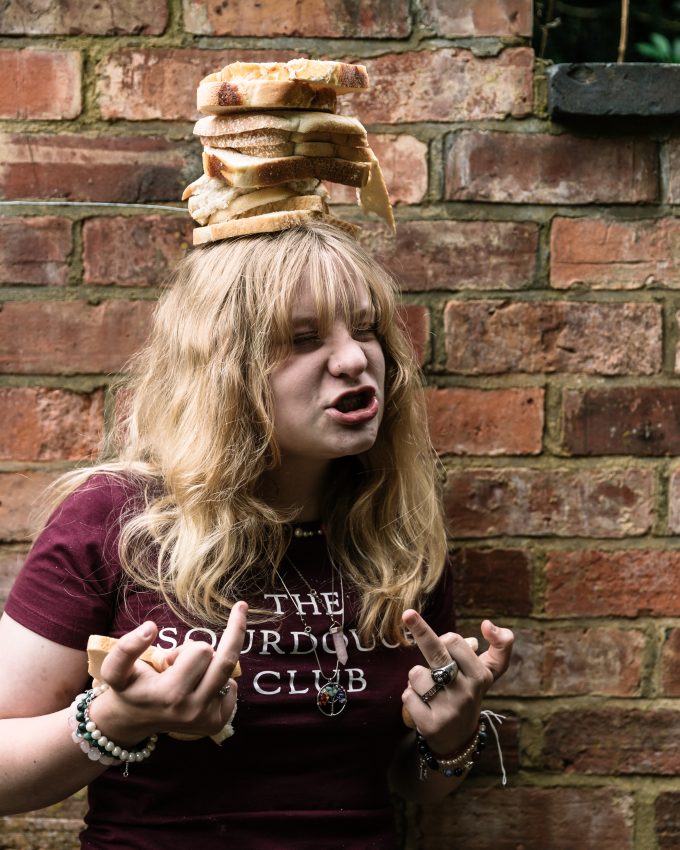 This is the evidence behind our new campaign: #ScrewWhiteBread

I recently read these words on an artisan T-shirt and I have to concur; when you contrast the understanding of sourdough against the known effects of eating white bread, among other highly processed modern foodstuffs, the science clearly shows that sliced white bread is one of the worst things you can consume for your microbiome – and thus your immune system. And yet, this kind of bread is one of mainstays of the modern highly processed Western diet, which comprises industrialised fat, sugar, salt, and very low-fibre bread. In June 2021, for example, researchers at Washington University School of Medicine warned in the journal Cell Host & Microbe:

‘Our research showed that long-term consumption of a Western-style diet high in fat and sugar impairs the function of immune cells in the gut in ways that could promote inflammatory bowel disease or increase the risk of intestinal infections.’

That’s just part of the damage. Tim Spector, the professor of genetic epidemiology at King’s College, who has recently been in the vanguard of the UK’s defence against COVID-19, has tested out the harm a highly processed diet does to our gut bacteria, using his 22-year-old son, Tom as a guinea pig. For ten days, Tom, a student, went on a diet made up exclusively of Chicken McNuggets and Big Macs, washed down with McFlurry ice cream desserts and regular Cokes. When Tom was only three days into the experiment, tests on his gut bacteria showed that 40 per cent of the bugs had already died. Imagine the devastation. Worse still, the bacteria that remained in Tom’s gut showed a worrying profile. Levels of health-promoting species had plummeted, while dangerous bacteria had thrived. In particular, he had significantly raised levels of bacteria associated with immune-system inflammation. Professor Spector found that several rare bacteria species flourished on the diet, including one called Lautropia. This, he explains, is ‘usually only noticed in immune-deficient patients’. Tom’s mix of gut bugs was still unhealthy a week after the experiment ended, but, thankfully, slowly began to return to normal once he began eating properly again. ‘Eating fermented foods seems important in this,’ says Professor Spector. All the available research supports Spector’s belief. Science is really only beginning to find out how important sourdough can be for supporting your body’s vital defences. But already we’ve got ample evidence to make a convincing case. 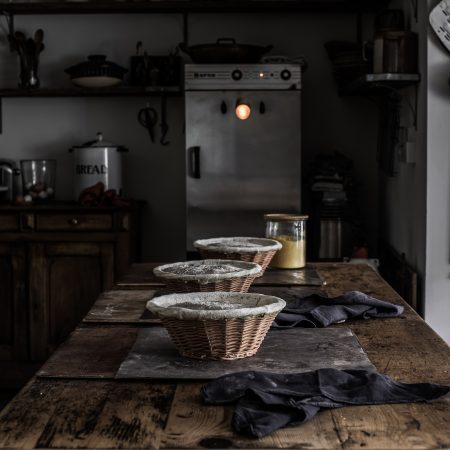 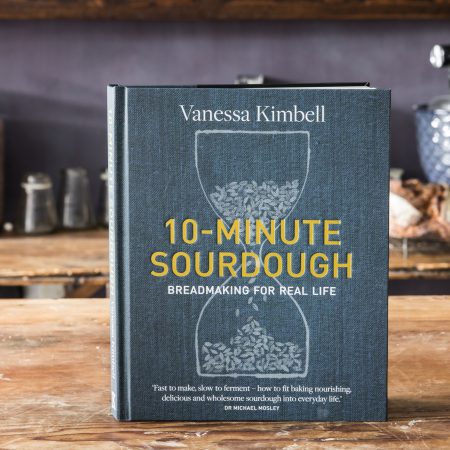 LOVE seeing our books on bakers hands. I can’t h

OUR SIGNATURE BLEND FLOUR The core of every loaf

LOVE this photo @eatpanecito thank you for sharing