This loaf was developed with Rhona, who brought Mungoswells Organic Wholemeal Strong Bread Flour along to our BYO Classic Sourdough Workshop. Mungoswells is a farm in the Scottish Borders, a region known for fertile soils and a climate well suited to growing cereals. The farm has been in the McDowall family since 1920, and has more recently installed a flour mill which allows them to produce flours from locally grown grain. All of the wheat used to mill their Organic Wholemeal Strong Bread Flour can be traced back to local fields. The quantities in this recipe can easily be halved or quartered if you want to make fewer loaves. But the bread does freeze beautifully if you want to make a batch and keep some for later use.After this bake, Rhona noted that a shorter prove might have been better, or using less starter.

The brand of flours used in this formula 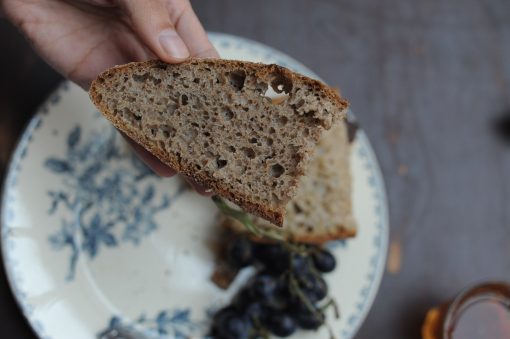 This Scottish wholegrain flour made with flour grown in East Lothian produced a full flavoured loaf, with a dark crust that Rhona described as ‘dark textured, chunky and masculine’. The aromas were of bran mash and cowshed – the smells of warm grain.  As we first bit into slices of the loaf, we noted flavours of roast coffee, yet sour with a nippy and full bodied rounded favour.  Chewing developed into a mellow and malty cereal flavours and it had a robust full chewy crumb. Finally, more piquant notes of malty beer came through. All in all, an interesting and delicious loaf that is filling and full of complex deep flavours.