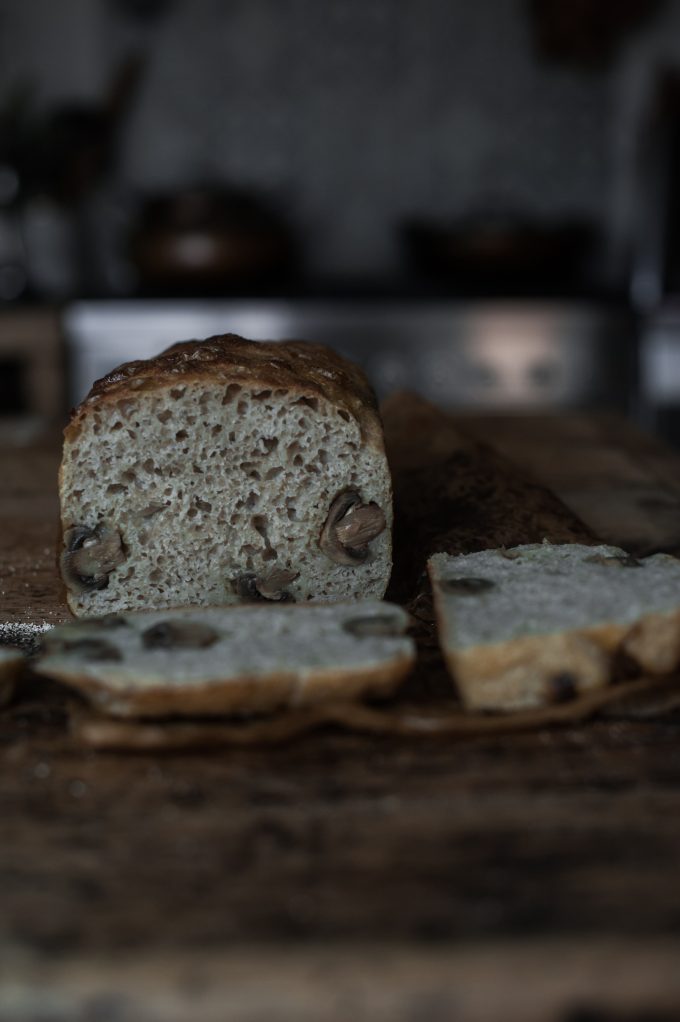 From the results of this study, we have incorporated white button mushrooms into a sourdough loaf which may help improve the function of your immune system and offer some protection against infection.

Our immune system is partly responsible for protecting us against infections by viruses and bacteria. It produces antibodies in our mucosal tissue, including our gastrointestinal tracts, which get released into our blood stream. One of these antibodies is called immunoglobulin A (IgA) and is one of the main components of our immune system. Research has found that the levels of IgA being produced can be lowered by stress and nutritional deficiencies and this may leave us more vulnerable to infections. So we’ve suggested this as an ingredient that can be incorporated into our sourdough to optimise the function of our immune system.

The results showed that those in the group with white button mushrooms added to their diet, produced significantly higher levels of IgA and at a higher rate than those who ate a normal daily diet. The IgA levels increased by a massive 53% in the first week and 56% in the second week for those who had consumed the white button mushrooms. This has been suggested to be due to the beta-glucans in the mushrooms causing the gastrointestinal mucosa to initiate the activation of the immune system and leading to an increase in the production of IgA.

With the results of this study suggesting a beneficial effect of white button mushrooms, we have incorporated them into an Immune Boosting Button Mushroom Sourdough Loaf which may help improve the function of your immune system and offer some protection against infection.

OBJECTIVE: Secretory immunoglobulin A (SIgA) acts as the first line of adaptive humoral immune defense at mucosal surfaces. A lack of SIgA or the inability to produce antigen-specific SIgA can lead to an increased risk of infections. Dietary intake may improve mucosal immunity by accelerating SIgA secretion. This study investigated the effect of dietary intake of Agaricus bisporus white button mushroom (WBM) on salivary IgA (sIgA) secretion in healthy subjects.

METHODS: Twenty-four healthy volunteers were randomly assigned to a normal daily diet (control group) or a normal diet with WBM. The subjects in the active group (n = 12, 41.4 ± 11.3 y old) consumed 100 g of blanched WBM daily with their normal diet for 1 wk, whereas those in the control group consumed their normal diet (n = 12, 43.5 ± 12.5 y old) without WBM. Saliva was collected before and after commencement of the study and every week thereafter for 3 wk. Saliva flow rate, sIgA concentration, and osmolality were determined and the sIgA:osmolality ratio and the sIgA secretion rate were calculated.

RESULTS: There was no significant difference between pre- and postdietary mushroom intakes for all indices in the control group (P > 0.05). In contrast, the mean sIgA secretion rate increased significantly at weeks 1 and 2 by 53% and 56%, respectively, compared with that at week 0 (P < 0.0005) in the WBM intake group and then returned to a baseline level at week 3. Changes in sIgA secretion rate over the intervention period were greater in the WBM group than in the control group without WBM. In both groups, no significant changes in osmolality and saliva IgG were noted. There was, however, a significant increase in the sIgA:osmolality ratio (P < 0.0012), confirming the postdietary WBM-induced sIgA increase.

What Does this mean for a baker?

From the results of this study, we recommend incorporating white button mushrooms into your sourdough bread or eating mushrooms on sourdough toast.  This is an example of a recipe for Immune Boosting Button Mushroom Sourdough Loaf which may help improve the function of your immune system and offer some protection against infection.