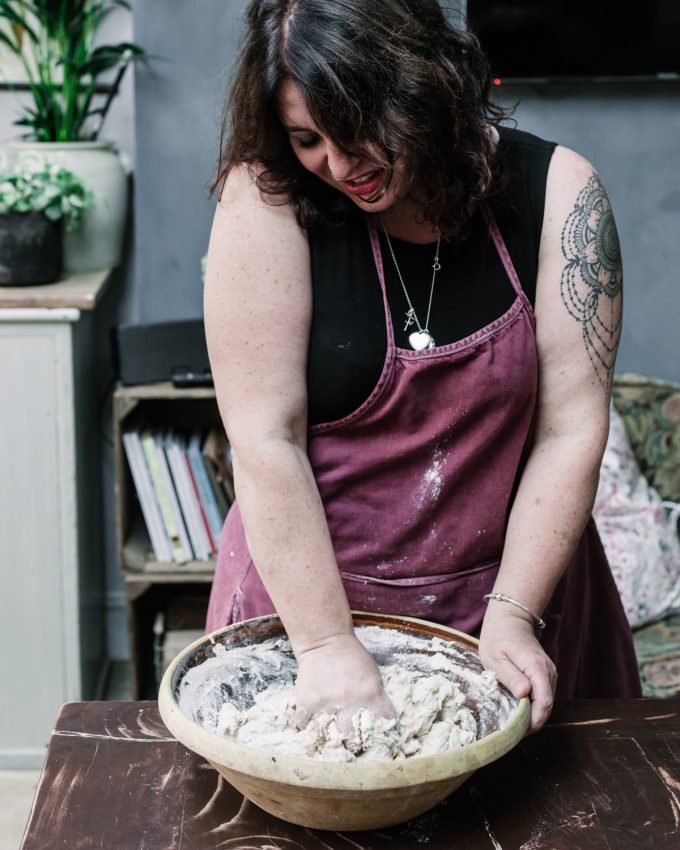 In my experience when flour is first milled it either has to be used straight away OR it needs to be oxidized before you can successfully bake bread with it. As the flour is freshly milled it is referred to as green flour, and no it is not actually the colour green but it is certainly not ready to bake bread with. It needs time to oxidise because the changes that take place affect not just the way in which the flour behaves but it also impacts the bread texture, taste, volume and crust. (At this point I need to point out that I am no scientist. I believe I got a grade C in biology at GCSE, and that was almost twenty-five years ago.) On a molecular level, the gluten structure is gradually strengthened through the development of disulphide bonds, however, thiol is also present in freshly milled flour. The thiol is an adjacent compound and it blocks the development of disulfide bonds that help form the gluten. It is the presence of oxygen that neutralizes the thiols allowing the disulfide bonds to form and the resulting cross-linking of the gluten molecules helps form a gluten matrix. As the oxygen gently gets into the flour the protein structure hardens and strengthens and therefore matures, so after about 4 weeks of being left to mature the flour is then ready to bake bread with.

A certainly in times gone by flour was stored in cloth sacks or flour bins and the flour would age naturally. However for the modern industrial-scale flour mills that produce hundreds of tonnes of flour a day with mills rolling 24 hours a day, 7 days a week, 365 days of the year storing such quantities large, waiting is just not practical, and so many industrial mass baking processes add oxidizing agents to strengthen the mix, which is a whole other article, however, ascorbic acid is predominately used as an oxidizing agent in the UK although there are many other agents used some of which are highly questionable in their long term health implications, most of which are banned nowadays (although this is really best covered in another article on additives especially because the addition of oxidizing agents in turn then affects the way in which the dough behaves, and some of which I know are still being used in 3rd world countries, despite being banned in the US and the UK.)

When first mixing leaven and water I encourage students when making sourdough bread to use a mixing motion with their hands to mix the flour in a way that aerates the dough. By encouraging oxygen into the dough you are still able to assist in the development of more gluten bonds. This action alone is enough to add to the development of the gluten and once the flour is added then I use a no-knead gentle fold and stretch techniques. Ironically over mixing and over kneading the dough result is over oxidization. Once over oxidization occurs the dough loses elasticity, and strength as the gluten structure breaks down, leaving a tough dense heavy textured and disappointing sourdough. You can tell when this happens because as the dough loses elasticity and is overworked the carotenoid pigments, which give flour its lovely creamy colour, are also broken down and destroyed leaving the dough somewhat whiter. The final thing that affects oxidization when making the dough is the ambient temperature. The warmer it is then the quicker oxidization takes place, so it is advisable to avoid over oxidization by making your dough in relatively ambient temperature, not to mention that fast fermentation of your sourdough gives a less developed flavour.

Truthfully you won’t over oxidise flour when mixing by hand, it’s only ever happened to me on a machine, but it is still worth understanding the concept.