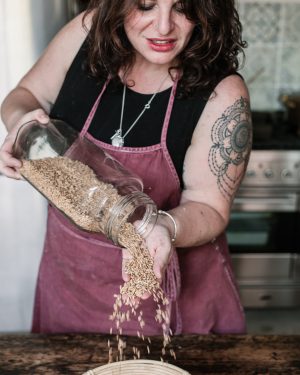 Spelt (Trictum spelta) is one of the most ancient forms of wheat, though it bears very little resemblance to the modern varieties we know today. It is a crop with an incredibly long history, grown over 9000 years ago in Mesopotamia and the Middle East. There is evidence of its existence in Ancient Greek and Roman texts, and spelt even gets a mention in the books of Exodus and Ezekiel in the Old Testament. Archaeologists have found spelt in many excavations, including in those of Stone Age Britain, so we know that it has a long history in this country.

It is thought to have arisen from a natural cross between emmer wheat (Triticum dicoccum) and wild goat grass (Aegilops tauschii). There are actually two spelt lineages: an Asian spelt (which follows the classic story of wild emmer being pollinated by wild goat grass, and from which modern bread wheat was possibly domesticated) and a European spelt. The European variety dates from about 4000 years ago and was first found around the Swiss lakes, whereas Asian spelt is much older, with samples found in the Levant around 9000 years ago. Having been widely grown, spelt fell out of favour in mediaeval times before being revived in the nineteenth century. In the early twentieth century, spelt again lost popularity when a number of modernising changes happened in agriculture, before disappearing from British soil altogether in favour of other, higher-yielding crops